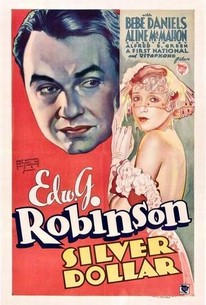 The factual story of H.A.W. Tabor and "Baby Doe" was the inspiration of Silver Dollar. Edward G. Robinson plays the Tabor counterpart, a prospector who strikes it rich with a silver mine. Robinson establishes the city of Denver, strongarms his way into political power, buys every creature comfort he can get his hands on, and deserts his faithful wife (Aline McMahon) for a flashy younger woman (Bebe Daniels, playing the character based on Tabor's mistress "Baby Doe"). Robinson is ruined by the decline of the silver market, spending his last days in near-madness planning and dreaming for a return to his glory days. In real life, it was Baby Doe who went insane, living (and dying) in a tiny shack near the once-prosperous silver mine. Stodgily directed, Silver Dollar isn't nearly as surrealistic as the true story it's based on. ~ Hal Erickson, Rovi

DeWitt Jennings
as Mine Foreman

Charles B. Middleton
as Jenkins

Emmett Corrigan
as Chester A. Arthur

Wade Boteler
as A Miner

William LeMaire
as A Miner

It should have been a juicy historical biopic.

It shows Silver Dollar hanging grimly to his store until his grub-stakers make him a millionaire, and then it shows his subsequent wildness in a series of slow, but fairly amusing episodes.

There are no featured reviews for Silver Dollar at this time.