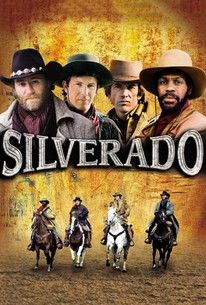 Lawrence Kasdan's Silverado is a fond hark back to the all-star, big-budget westerns of the 1950s and 1960s. The various plotlines converge at the town of Silverado, held in thrall by crooked sheriff Brian Dennehy and his behemoth "deputies." The four disparate heroes--Kevin Kline, Kevin Costner, Scott Glenn and Danny Glover--prepare to do battle against Dennehy for personal reasons ranging from mercenary to altruistic. Sidelines characters include duplicitous, dandified gambler Jeff Goldblum, frontier widow Rosanna Arquette and gimlet-eyed saloon owner Linda Hunt. The film is stolen hands-down by Kevin Costner, playing an irresponsible young gunslinger who never speaks when hootin' and hollerin' will do. A classic, High Noon-style showdown caps this rousing retro western. ~ Hal Erickson, Rovi

Jon Kasdan
as Boy at Outpost

...In other words, there's a lot less going on in Silverado than pleases the eye.

The western is back, and with writer/director Lawrence Kasdan at the reins, you're glad to see it.

Real rewards of the film are in the visuals and rarely has the West appeared so alive, yet unlike what one carries in his mind's eye. Ida Random's production design is thoroughly convincing in detail.

Kasdan resorts to a TV-like shorthand, substituting shtick for personality.

"Silverado" is the real thing, a good old-fashioned Western that shoots straight, rides tall, and moves quicker than a cowboy galloping off to the chuck wagon.

Not reaching the mastery of the film starring a vengeful spirit, the truth is that 'Silverado' is a feast for the senses. [Full Review in Spanish]

Called "revisionist" upon release in a bizarre misuse of the term, Silverado is neither something new nor something paying homage but rather a hollow facsimile

It's like a colossal buffet: You take what you want and leave the rest, readily forgiving the worst of it because the best just tastes so good.

Filled with enough stock characters and B-film plotlines for a dozen mediocre Westerns.

A lot of fun even though the narrative sags a little. Full review later.

Classics modern-day western that is VERY AWARE of what it is. What a line-up of talent to go with such a great story. I had a BLAST!

Kevin Kline, Scott Glenn, Danny Glover and Kevin Costner . . They all shine in their roles and its oneo f the best westerns out there. Its funny in all the right places. This was Costner before he got big. And it shows again what a great actor Kevin Kline is.