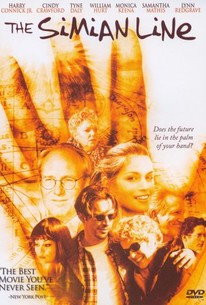 Director Linda Yellen spins this study of four couples as they struggle to maintain their relationships. Middle-aged divorcée and landlord Katharine (Lynn Redgrave) is completely smitten with her live-in lover Rick (Harry Connick, Jr.). She loves throwing parties, and on one Halloween she hosts a dinner for some wildly dissimilar guests: her tenets Sandra (Cindy Crawford) and Paul (Jamey Sheridan) are conservative professionals, while fellow building dwellers Marta (Monica Keena) and Billy (Dylan Bruno) are rock musicians. Also at the party is wacky psychic Arnita (Tyne Daly). During dinner, Arnita sees the spirits of another couple: Mae (Samantha Mathis), a flapper from the 1920s, and Katharine's great-grandfather Edward (William Hurt). Unnerved, Arnita predicts that one couple will split up by year's end. Though initially shaken, the guests brush her off as a nut. Yet toward the year's end, Katharine grows increasingly jealousy of Rick's flirtation with Sandra.

Jeremy Zelig
as Jimmy
View All

Critic Reviews for The Simian Line

An uneven, at times absorbing portrait of four couples struggling to define their relationships.

It's partly the characters and partly the performers who are responsible for generating more feelings in the afterlife than the film's Weehawken Six achieve in here and now.

The story, such as it is, is hackneyed mush of the most contrived and patronizing kind.

One of those exercises in romantic whimsy that misses its mark: It's alternately sappy and uncomfortably harsh.

Reveals [Yellen's] mastery of artifice and theatricality in the service of eliciting genuine emotion and insight into human nature.

It is like an anthology that offers only one story that clicks.

We grownups need more of this kind of silly, sweet, knowing romantic movie.

In the end it's simply weak.

See it now or wait for cable? It's a fine Line.

Audience Reviews for The Simian Line

There are no featured audience reviews yet. Click the link below to see what others say about The Simian Line!