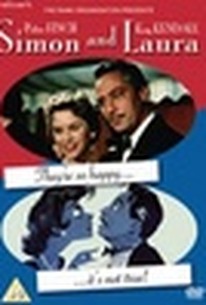 Love, marriage and show business provide the basis of this lively comedy that centers on a husband and wife, who are chosen by television producers to embody the perfect married couple on an upcoming television series. The show is to be filmed and broadcast live from the home of Simon and Laura, who on camera are indeed the perfect couple. Unfortunately, the minute the camera is off, the two are going at it like cats and dogs. Still, their show is very popular, and many couples look up to them until the ill-fated shooting of a Christmas special in which the couple begin tippling alcoholic beverages during the filming and end up letting their true relationship come out. ~ Sandra Brennan, Rovi

Critic Reviews for Simon and Laura

Its satire and sophistication make a refreshing change and I can heartily recommend it.

Handsomely mounted and more sophisticated than the usual run of British comedies, Simon and Laura provides a gentle but sometimes telling satire at the expense of the BBC and the acting profession.

There are no featured reviews for Simon and Laura at this time.