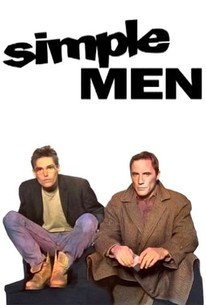 A pair of brothers dodge the law while trying to locate their long-lost father in this third feature from independent New York filmmaker Hal Hartley. Robert John Burke stars as Bill McCabe, a failed computer thief who's just been doublecrossed by his girlfriend and partner. Vowing revenge on the next beautiful blonde he encounters, Bill meets up with his younger brother Dennis (William Sage), a philosophy student concerned about their father William (John A. MacKay). It seems the McCabe paterfamilias was a former major league shortstop who became an anarchist bomber in the 1960s, nearly blowing up the Pentagon. On the run for twenty-three years, William was recently caught by the FBI but escaped again. Based on information from their mother, the McCabes travel to Long Island, where William may be hiding. Along the way, the brothers meet the epileptic Elina (Elina Lowensohn) and her friend Kate (Karen Sillas), a beautiful blonde with whom Bill is instantly smitten. While Dennis figures out that Elina is somehow connected to William, Bill contends with Kate's ex-con husband Jack (Joe Stevens) and Jack's best friend Martin (Martin Donovan), both of whom are also in love with her. ~ Karl Williams, Rovi

Ed Geldart
as Cop at Desk

This original film features extreme factions of America: Bill (Robert Burke) is a robber-mechanic, an amalgam betweenn 1980s Reagonomics overachiever and a thug, and Dennis (William Sage), a scientist-philosopher.

The problem with postmodern movies like Simple Men is that they seem to consider us fools for watching them and, on the basis of the evidence on the screen, it's hard to disagree.

Hal Hartley's formula is to tease us with what appears to be a succession of crazy red herring but, defying all credibility and charming us at the same time.

Pairing Hal Hartley with Martin Donovan and folks always seem to produce memorable films and this one is as well.