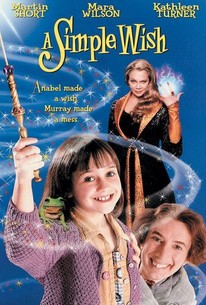 This comic children's fantasy from director Michael Ritchie stars Mara Wilson as eight-year-old New Yorker Anabel, who wishes that her father Oliver (Robert Pastorelli), a hansom cab driver in Central Park, would see his dream come true. In a thinly veiled jab at the overblown stage productions of Andrew Lloyd Weber, Oliver aspires to be cast in the lead role in a new big-budget musical based on A Tale of Two Cities. Anabel's wish is received by Murray (Martin Short), the very first male fairy godmother, a bumbler who predictably botches the spell fulfilling Anabel's wish, turning Oliver into a statue instead. In order to reverse the mistake, Murray needs help from his union, the North American Fairy Godmothers Association (NAFGA), which is holding a convention in Manhattan. Enter Claudia (Kathleen Turner), a scheming former fairy godmother turned witch, who steals the attendees' magic wands, intending to use their magic in a bid for power. A Simple Wish (1997) was one of four films representing the initial slate of The Bubble Factory, a movie production house assembled by the theater world's Sheinberg family. Their other films were The Pest (1997), McHale's Navy (1997), and For Richer or Poorer (1997).

Critic Reviews for A Simple Wish

A Simple Wish has assembled all the trinkets and effects necessary for its story, without bothering to tell one.

Not even Short can make A Simple Wish memorable, often looking as though he's merely surviving the work, stripped of his killer instinct.

Above average kids movie. The girl has real brains, which is great for kids to see.

It's not brilliant or for adults, but it's a nice, pleasant movie you can pretend to be eight years old with.

The ensuing comic clash between inept Murray and smarmy Claudia is almost as funny as 'Long Day's Journey Into Night,' and every bit as magical.

Audience Reviews for A Simple Wish

A so-so movie about a kid who makes a wish and it comes true. It's pretty predictable, and not very funny.

Martin Short is a weird as a bumbling fairy godmother in this modern fairy comedy movie.