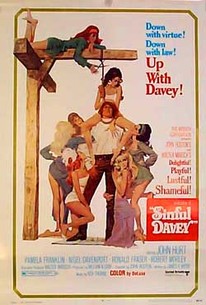 Davey Haggart (John Hurt) wishes to follow his father's footsteps and become a highway robber. He also wishes to avoid his father's fate -- which was death by hanging at the tender age of 21 after a botched robbery of the Duke of Argyle (Robert Morley). Davey commits a daring robbery in broad daylight with the help of two henchmen (Ronald Fraser and Fidelma Murphy) and heads for the highlands of Scotland to hide out. The local Constable (Nigel Davenport) warns young Davey he will end up just like his father but helps him escape the fate of dancing on the end of a rope. Annie (Pamela Franklin) is the kind-hearted farm girl who tries to make sweet Davey give up a life of crime and settle down. This comedy was taken from the autobiographical diary"The Life Of David Haggart." ~ Dan Pavlides, Rovi

Robert Morley
as Duke of Argyll

Maxine Audley
as Duchess of Argyll

Paul Farrell
as Bailiff of Stirling

An inconsequential but likeable romp.

The movie isn't as bad as it is unrealized, like a photographed steno report of the ideas thrown around at a story conference.

It's a cheerful, loose-limbed, lacka- daisical sort of entertainment: no more, but no less.

The cast is just marvelous, providing the right amount of zest and derring-do to make this film work.

It's possible to get a few chuckles here and there.

There are no featured reviews for Sinful Davey at this time.