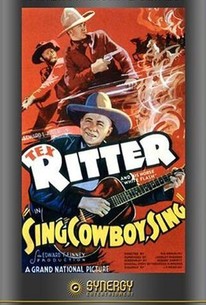 Singing cowboy Tex Ritter once again battled the ornery Charles King in this average music Western from poverty row company Grand National. The usually so jovial Robert McKenzie joined King this time, playing mean Judge Roy Dean and conspiring to take over the Summer's Freight Line. Passing cowboys Tex Archer (Ritter, who warbles the title-tune and his own Goodbye Old Paint) and Duke Evans (Al St. John) happen upon the dead body of George Summers (Jack C. Smith) and decide to take up the fight against the crooked judge. They are briefly jailed but escape in time to save Madge Summers (Louise Stanley) and bring the villains to justice. A big fan of silent slapstick comics, Ritter constantly badgered his producer, Edward F. Finney, to hire former Keystone Kops and in addition to St. John, Sing Cowboy, Sing also featured Snub Pollard and Chester Conklin.

There are no critic reviews yet for Sing, Cowboy, Sing. Keep checking Rotten Tomatoes for updates!

There are no featured audience reviews yet. Click the link below to see what others say about Sing, Cowboy, Sing!