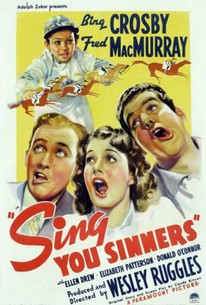 A fun-loving, irresponsible bachelor proves to be the bane of his well-meaning mother's existence. If it were up to her, Joe Beebe (Bing Crosby) would be more like his hard-working, stodgy brother David (Fred MacMurray) so that he can be a good example to his youngest brother Mike (13-year-old Donald O'Connor). The one thing that unites the small clan is their love of music. All three brothers regularly team up to perform at a local night club, where they earn some badly money. But Joe, tires of small town life and decides to seek his fortune in Los Angeles. He leaves with the promise that he will send for the others as soon as he is a success. Time passes and eventually he sends for them. Unfortunately, the mother and his little brother arrive to discover that Joe has sold his business and spent every last dime on a race horse that he swears is going to be a big winner after a little training. The rest of the family isn't so sure and this creates considerable turmoil that is only made worse when gangsters get involved.

Earl Roach
as Drummer
View All

Critic Reviews for Sing You Sinners

There are two or three songs, none of them outstanding, and the whole thing is easygoing, pleasant, and not particularly remarkable...

Audience Reviews for Sing You Sinners

There are no featured audience reviews yet. Click the link below to see what others say about Sing You Sinners!