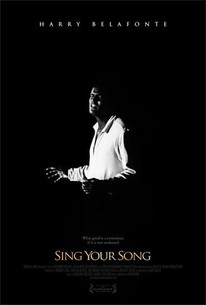 Sing Your Song, surveys the life and times of singer/actor/activist Harry Belafonte. From his rise to fame as a singer, inspired by Paul Robeson, and his experiences touring a segregated country, to his provocative crossover into Hollywood, Belafonte's groundbreaking career personifies the American civil rights movement and impacted many other social justice movements. Rostock reveals Belafonte as a tenacious hands on activist, who worked intimately with Dr. Martin Luther King Jr., mobilized celebrities for social justice, participated in the struggle against apartheid in South Africa, and took action to counter gang violence, prisons, and the incarceration of youth. -- (C) Official Site

News & Interviews for Sing Your Song

View All Sing Your Song News

Critic Reviews for Sing Your Song

Sing Your Song is broad and complete, but like most biographical documentaries of legendary performers that we've seen of late, it is also hagiographic.

By far the best parts are the first two-thirds, with the star taking center stage in history as it unfolds.

Abundant archival footage is in part a saving grace.

Sing Your Song is beautifully directed by Susanne Rostock to be as much about the man as it is about his times.

With excerpts of early clips of his first roles, to current interviews with him, the movie details a life of tremendous creativity and courage.

This is a fabulous documentary about a man and the times that were, and hopefully still are, a-changin'.

With Belafonte narrating his own story, Sing Your Song increasingly feels more like a personal memoir than objective insight.

[Belafonte] emerges at the end as a man of bravery and probity, a formidable contributor and witness to his times.

This is a fascinating portrait of a man who has always had the courage of his convictions.

The man has lived an incredible life, and this comprehensive doc conveys that in compelling fashion.

While it's fascinating, it feels a bit heavy-handed.

Rich Cline
Shadows on the Wall
View All Critic Reviews (40)

Audience Reviews for Sing Your Song

"Sing Your Song" is an illuminating documentary about the life, times and career of Harry Belafonte. Whereas some people like Bill Clinton only think of him as a very talented singer, there is much more to him, like his selfless activism which the movie focuses on that began with an eye-opening visit to the South and his first experiences with Jim Crow laws. So, he went to work to end desegregation in the civil rights movement, plus in his musical acts.(For example, there is a clip of him singing Hava Nagila.) But his experiences do not end there, as he has lately been expressing interest in the high number of minorities in prison in this country. All of which has not been without setbacks, as Belafonte also had to battle network censors in less enlightened days and before cable television but "The Smothers Brothers" having him singing Calypso in front of scenes of police riots just looked like they wanted to get fired at that point.(Although, if you have to go, that's the way to go.) So, whereas it is fair to assume the FBI was watching Belafonte like all other civil rights activists, the evidence the documentary has against one possible informer is spurious to say the least. And your grandparents are right: Tony Bennett is cool.

Probably one of the best documentaries I have ever seen. I love how passionate Harry Belafonte is about his activism in human rights - and he surely continue to inspire us and other entertainers. Really glad I get to know him because of this film, such a courageous human being. So many great quotes that I could get from this film. The most important thing that I get from watching this is we have to stick up to our ideals, no matter how hard the circumstances are. Watched this film from the 55th BFI London Film Festival.