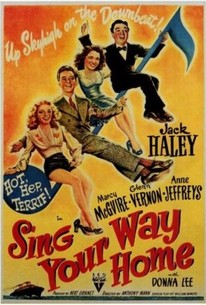 In this musical comedy, an arrogant war journalist is sailing back to the Big Apple after the end of WW II. En route, he has been assigned to watch over a band of teenagers who were trapped in Europe four years ago while entertaining the troops. Their entrapment has done nothing to dim their enthusiasm for performing and while waiting for passage the crews entertain everyone at every opportunity. Songs include: "I'll Buy That Dream" (sung by Anne Jeffreys), "Heaven Is a Place Called Home," "Seven O'Clock in the Morning (Waking up Boogie)," "Somebody Stole My Poor Little Heart" (Herb Magidson, Allie Wrubel), and "The Lord's Prayer" (arranged by Albert Hay Malotte). ~ Sandra Brennan, Rovi

Edward Gargan
as Jailer
View All

There are no critic reviews yet for Sing Your Way Home. Keep checking Rotten Tomatoes for updates!

There are no featured reviews for Sing Your Way Home at this time.