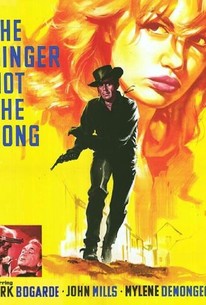 This unusual western concerns the conflict between a priest and a Mexican bandito from A Night to Remember (1958) director Roy Baker. Father Keogh (John Mills) is a Catholic priest who arrives in the remote Mexican village of Quantano to build a congregation, unaware that the town is terrorized by the ruthless criminal Anacleto (Dirk Bogarde). An atheist, Anacleto has forbidden worship, so when Keogh holds services, Anacleto retaliates by murdering the locals in alphabetical order. Keogh refuses to back down. Impressed by his valor, Anacleto calls his men off and makes the priest an offer -- he'll spare him if he determines which inspires greater good, "the singer" (the priest) or "the song" (religion). Keogh doesn't answer. Meanwhile, one of the clergyman's followers, the young girl Locha (Mylene Demongeot), flees when her family, realizing that she's in love with Keogh, arranges a marriage with someone more suitable. Anacleto finds the girl and offers Keogh another deal. He'll let the girl live if the priest will admit his failure before his congregation.

John Bentley
as Chief of Police

Critic Reviews for The Singer Not the Song

Though The Singer Not the Song misses the strongly individual flavour of, say, The Sleeping Tiger, it is nevertheless a strangely compelling film. This is mainly due to the presence of Bogarde himself.

An oddball Western Roy Rogers would not have a song for.

Audience Reviews for The Singer Not the Song

Somewhat of a camp classic to say the least - Dirk Bogarde flouncing around in leather chaps pretending he doesn't want to bed John Mills.

The Singer Not the Song Quotes