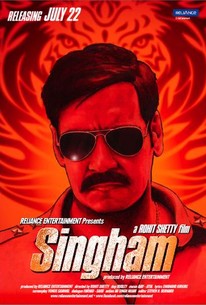 In the backdrop of Shivgad, a small village in the border of Maharashtra and Goa, the film revolves around the story of an honest, diligent and honoured Inspector Bajirao Singham played by Mr. Ajay Devgn who fights against injustice and prejudice using his own ethics and principles. A sudden strike of destiny sets up Singham against the tremendously powerful criminal cum politician Jaykant Shikre (Prakash Raj), challenging his morals and beliefs. Jaykant's powerful planning and force makes Singham land up in the ruling city of Jaykant Shikre, the city of 'Goa', where he leaves no stone unturned to make Singham's life a nightmare to live. Singham's supportive girlfriend Kavya (Kajal Aggarwal) and his tryst with Late Mr. Rakesh Kadam's family makes him realize the importance to bring a change in the system by eradicating the root cause Jaykant Shikre, by not going against the law of force but by being a powerful part of it. -- (C) Reliance

Singham works in bits and pieces, only when [Ajay] Devgn gets fully into his stride, squaring up to [Prakash] Raj as he hits the high notes. The rest is just stitched-up scenery.

Bollywood fans are more likely than not to be able to go with "Singham's'" lengthy - but lively - ride.

More and more, Bollywood movies are urban tales for urban audiences. What feels most backward-glancing about "Singham" is its uncomplicated, even cartoonish insistence on the benefits of village soil over city dirt for cultivating bedrock Indian values.

Singham is such a mighty blast from the past, it leaves you reeling under its impact.

The film is very uneven and suffers greatly from it's desire to mimic South Indian action films.

There are liberal dashes of comedy and action all rolled into one typically Shetty film.

This run-of-the-mill action flick, which was a huge hit at the (Indian) box office, somehow managed to hold my attention too. It's the usual good v/s evil movie which I doubted would interest me the least. Probably some kind of stories executed in a specific way never disappoint big time.