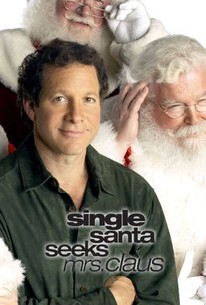 Her heart hardened by innumerable bad breaks, widow Beth Andrews (Crystal Bernard) has but two goals in life: to become the most successful advertising executive in the country and to convince her son, Jake (Dominic Scott Kay), to abandon all his childish fantasies. But Beth can't shake Jake's belief in Santa Claus, and it is to Santa that the boy sends a Christmas "wish list," asking for a new father. Before long, Beth finds herself attracted to a shabby but likeable chap named Nick (Steve Guttenberg). However, when Nick insists that he is the son of the "real" Santa Claus, and that he cannot inherit the throne of the North Pole until he takes himself a bride, Beth begins to wonder if the new man in her life is a few ornaments short of a full tree. Cheerfully emulating such past Christmas classics as Miracle on 34th Street, the made-for-cable Single Santa Seeks Mrs. Claus was originally telecast December 11, 2004, on the Hallmark Channel.

There are no critic reviews yet for Single Santa Seeks Mrs. Claus. Keep checking Rotten Tomatoes for updates!

Not great, but kind of cute. It has pretty much the same plot of Santa Clause 2. Guttenberg plays Santa Jr. well, but...in all honesty, he's kind of creepy in parts. He overdoes the overgrown child role, making him seem 'special'. It does pick up extra points for having some real Christmas cheer, even if it's overly cheesy. Good for a gentle afternoon in the lead up to Christmas, but it certainly wont be headlining Christmas Day.