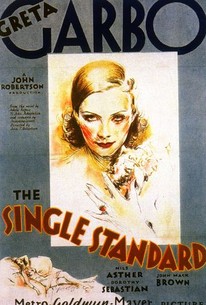 Worried that Greta Garbo's rich, deep voice and thick Swedish accent would not record properly, MGM executives kept Garbo in silent pictures longer than any of the studio's other contractees. The star's penultimate silent effort (with music and sound effects added) was The Single Standard, based on a 1928 novel by Adela Rogers St. John. Weary of the "good old boy" mentality which dictates that men can flit from girl to girl while women are expected to remain faithful, San Francisco socialite Arden Stuart (Garbo) decides to adopt the "single standard" and play the field herself. She turns down a marriage proposal by millionaire Tommy Hewlett (Johnny Mack Brown) so that she can dally with her family's chauffeur Anthony (Robert Castle), who promptly kills himself when he realizes that Arden doesn't intend to remain exclusively his. The heroine then moves on to athlete-artist Packy Cannon (Nils Asther), eventually tiring of Cannon and returning to Tommy. By this time, Arden has abandoned the notion of sex without responsibility and agrees to marry Tommy and bear his children. Beautifully photographed in the MGM manner by Oliver Marsh, The Single Standard is a prime example of how to tell an essentially "talkie" story within the confines of the silent film.

Critic Reviews for The Single Standard

The Great Garbo, the Swedish star, in her penultimate silent.

Audience Reviews for The Single Standard

The story is hokey and dated but Garbo is amazing contemporary.