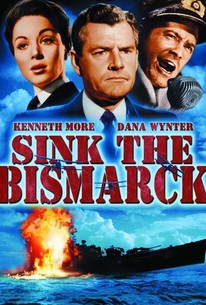 The Bismarck is a German battle ship that is the scourge of the British Navy in World War II. When the ship sinks the battleship Hood, the British plan an all out search for the Nazi war vessel. A daring and suspenseful cat and mouse game ensues, complete with warfare being waged in the frigid North Atlantic waters and spectacular battle scenes. Based on a true story, the popularity of the film was greatly enhanced by the title tracked hit record by singer Johnny Horton, who's "Battle Of New Orleans" was the top record of 1959.

Edward R. Murrow
as Himself

Critic Reviews for Sink the Bismarck!

This is an exciting and convincing war-at-sea drama from Britain.

It's for obvious reasons, fairly predictable, it tells the tale of a major naval victory in a way which is both tense and engrossing

This well-done World War II film takes an almost documentary-like look at the battle to destroy the mighty German warship.

A faithful retelling of the real-life naval battle, a colourful portrait in black and white.

Audience Reviews for Sink the Bismarck!

Kenneth More leads a large cast of sea captains who need to sink the dreadnought of the seas at that time, owned and operated by the damned Nazis. The story itself is less about the Brit effort unfortunately, than about kraut stupidity, allowing themselves to get ganged up on in the North Sea. It, nonetheless, engages.

Its a war film with Kenneth More so will be great. He was made to play war film parts and does this really well in this one.