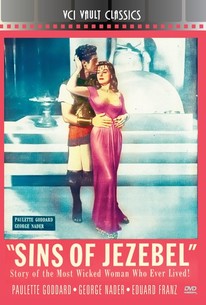 Her days of cinematic glory behind her, Paulette Goddard was compelled to take whatever came along in the mid-1950s. Playing the title role in Sins of Jezebel, Goddard survives the ordeal armed with little more than grim determination. The wicked princess of Phoenicia, Jezebel hopes to expand her power by marrying Ahab (Eduard Franz), the King of Israel. Jezebel brings destruction upon the Israelites through her many sexual peccadilloes and orgiastic bacchanals. The film's nominal leading man is George Nader, cast as a charioteer who succumbs to Jezebel's wiles. Surprisingly, the film manages to be quite entertaining within its tiny budget. The "redeeming moral value" of Sins of Jezebel is achieved by having the film presented in flashback, during a sermon delivered by pious preacher Elijah (John Hoyt).

Carmen D'Antonio
as Dancer
View All

Critic Reviews for Sins of Jezebel

Vintage cheese, still tasty. And how did Joe Besser get into this Biblical drama?

There are no featured reviews for Sins of Jezebel at this time.