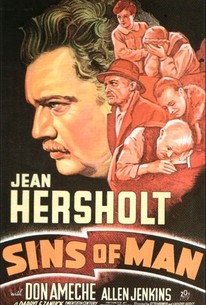 A bell ringer's wife dies while giving birth to his second son who turns out to be deaf. His oldest son moves to America where he becomes a successful engineer. Meanwhile, back at home in Austria, the bell ringer gives his remaining son to a monastery and then wanders off to become a bum. Years pass and eventually the hearing-impaired boy grows up. During WW I, an explosion miraculously restores his hearing. He then becomes a musician and moves to America where he not only finds fame and fortune, but also renewed family ties.

Fritz Leiber
as Father Prior

Gene Reynolds
as Karl Freyman as a Boy

Mickey Rentschler
as Gabriel Freyman as a Boy

Critic Reviews for Sins of Man

There are no featured reviews for Sins of Man at this time.