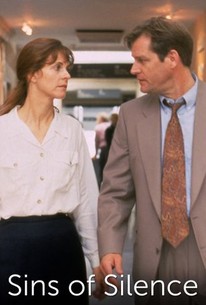 Lindsay Wagner stars in this TV movie as Molly McKinley, a former nun now employed (and grossly underfunded!) as a rape counselor. A teenager named Sophia (Holly Marie Combs) seeks out Molly's help after she is raped by the scion of a wealthy family. Refusing to release a confidential file that would reveal Molly's past promiscuity--and thus seriously compromise her case against her assailant--Molly is sent to jail. The problem now becomes two-pronged: If Molly wants to be released, she must hand over information that may allow the rapist to go free; and if Sophia doesn't speak up, Molly's future career will be destroyed. Although the film would seem to be inspired by the 1988 theatrical feature The Accused, it was based on a true story. Sins of Silence originally aired February 20, 1996 on CBS.

Christina Cox
as Volunteer
View All

Critic Reviews for Sins of Silence

There are no critic reviews yet for Sins of Silence. Keep checking Rotten Tomatoes for updates!

There are no featured reviews for Sins of Silence at this time.