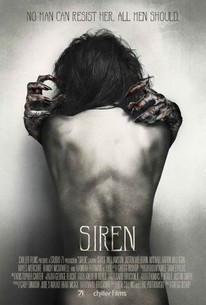 SiREN is a horror-thriller about Jonah, an apprehensive groom-to-be whose bachelor party turns into a nightmare when he frees a seemingly innocent victimized girl locked up in a supernatural sex club. Her ruthless handler and proprietor of the sex club will stop at nothing to re-capture his prize. Jonah struggles to rescue the girl only to discover it is he who needs to be rescued as he comes to the realization that she is a dangerous fabled predator who has chosen him as her mate.

Guess the Tomatometers for Incarnate and Believe

An energetic and entertaining exercise that could spawn its own spin-offs.

A movie about implanted memories, a stripper with a tail, and winged creatures, but it doesn't have the personality to make any of that interesting.

For the most part this is a clever and confident expansion of a terrific short. It stings less but packs plenty of poison.

The movie is a not-great horror flick, but if it discourages one future groom from having a final ill-advised night of debauchery, it will have served a purpose.

A lot can go wrong in a movie centered on a supernatural strip club. So why is Siren so damn entertaining?

This is fundamentally the main issue with SiREN as a whole. It's frequently, often laugh-out-loud funny but it's not nearly scary enough to qualify it as a decent horror-comedy.

Creativity to the supernatural elements and good performances ensure that Siren's shortcomings are easily overlooked.

SiREN is a strong idea that is somewhat squandered. An example of less would've been more.

It's perhaps not terribly surprising to note that SiREN only works in starts and fits...

But in spite of such clichéd grounding, Bishop manages to create something both compelling and oddly original.

If you need a few reliably R-rated scares presented in a relatively creative way, look no further.

Gregg Bishop's adaptation is a solid mix of horror and fantasy with strong special effects, some original world building plot devices, and a great return performance by Hannah Fierman.

I know this film seemed familiar in its concept and execution, it's because this is a full-length version of one of the shorts from the original VHS, a fun anthology horror movie. I honestly don't know how I feel about this movie, quite frankly, because while I did enjoy the short in VHS very much, I don't think it quite makes as smooth a transition to feature-length film as other shorts that made the transition to feature-length, like Alive in Joburg, which was the inspiration behind District 9. I think District 9 made the transition for easily simply because it had a wide variety of themes to choose from and explore in detail. This is a movie about four guys, going to an underground strip club or something, and releasing a woman they feel is being kept there against her will and then realizing that they released some sort of murderous demon. That's about as straightforward as you could possibly get, there's no real room to explore much of the characters in depth. Not even Lilith, and I'm assuming they were looking to remind you of the Jewish mythological figure Lilith, who was Adam's (of Adam and Eve fame) first wife in their mythos. Anyway, the point is that while they seek to remind you of that demon, it's not like the Lilith in this movie IS actually that demon. There's literally no mention of her past or anything, which is the sort of thing you'd do if you wanted to be more of a religious angle. I don't know, honestly, part of me felt that the VHS short was so much more superior to this. Mostly because there was absolutely no room to fuck around. They had a limited amount of time to get their story across and they did so in the fastest way possible without sacrificing their vision. This movie, on the other hand, at least in theory, doesn't actually have time limits. They could have made this movie as long as they wanted. And, thankfully, the film is still really short. But, even with that, I don't think there's enough interesting ideas to justify a full-length movie. I think this concept works best, really, as a short film and I think that much is obvious when you look at the final product. And I'm not even saying that this is a bad movie, because it's actually not, but I honestly just couldn't get that much into any of the proceedings. I don't think the characters were all that interesting, outside of the owner of the underground strip club, played by Justin Wellborn. I think Mr. Wellborn was the only person who was actually good in this film, he's obviously a talented actor. The actress who plays Lily, Hannah Fierman, is good at the physical aspects of the role. I don't know if she's actually a good actress or not, but she does a good job at playing this murderous demon. I felt that none of the bros in the movie were all that good, but it's not like they were completely awful either. The look of the film isn't great and I think that's part of the reason I just couldn't get into it. It's just not particularly inviting. It's obvious that the look of the film isn't everything, and it's not even my main issue with the flick, but it just gives off the appearance of cheap movie made for a niche television network, Chiller. My main issues with it are that the concept just doesn't hold up outside of a short film concept. The characters aren't that interesting, the writing is somewhat dull and the acting isn't that good to begin with, outside of one person. So, yea, I don't know. That makes for a slightly below average film to me. Nothing you really need to go out of your way to see, especially if you already saw the short in VHS. That short is superior to this in pretty much every way.