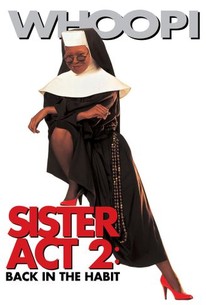 Critics Consensus: Sister Act is off-key in this reprise, fatally shifting the spotlight from Whoopi Goldberg to a less compelling ensemble of pupils and trading its predecessor's sharp comedy for unconvincing sentiment.

Critics Consensus: Sister Act is off-key in this reprise, fatally shifting the spotlight from Whoopi Goldberg to a less compelling ensemble of pupils and trading its predecessor's sharp comedy for unconvincing sentiment.

Critic Consensus: Sister Act is off-key in this reprise, fatally shifting the spotlight from Whoopi Goldberg to a less compelling ensemble of pupils and trading its predecessor's sharp comedy for unconvincing sentiment.

Sister Act 2: Back in the Habit Photos

In the sequel to the hit comedy Sister Act, Whoopie Goldberg reprises her role of Deloris Van Cartier, a Las Vegas entertainer who hid out with in a convent of nuns to avoid a nasty bunch of gangsters. In Sister Act 2: Back in the Habit, Deloris is persuaded to return to the convent by the Mother Superior (Maggie Smith), because her help is needed in teaching their choral students at St. Francis High in San Francisco. However, St. Francis is in a crisis, since the administrator running the school (James Coburn) is threatening to shut the place down. If the gospel choir wins first place in a singing contest in Los Angeles, St. Francis will be saved from the priest's plans. Though the plot is rather thin and derivative, Sister Act 2 is lighthearted fun, thanks to good musical numbers and winning performances from the cast.

News & Interviews for Sister Act 2: Back in the Habit

Know Your Critic: Sharronda Williams, Founder of Pay or Wait
“Rotten Tomatoes Is Wrong” About… Sister Act 2: Back in the Habit

View All Sister Act 2: Back in the Habit News

Critic Reviews for Sister Act 2: Back in the Habit

Even by sequel standards, a minimal amount of creativity has gone into "Sister Act 2," and not even the talents of its cast, including several likable young people, can compensate for this thrown-together feeling.

Considering how terribly resistible (to me, at least) last year's Sister Act was, the sequel seems like a movie miracle.

Why Whoopi took up the habit here is a mystery-unless she's tired of this part and wants to make sure there won't be any more "Sister Acts."

While the kids may sing a storm when at last they get down to mixing Beethoven, gospel and rap, in the good clean fun department this is monumentally weak and derivative.

Two trips to the convent is one too many.

I hope what they all got paid made it worth the bother.

A singer's movie for the ages, one with virtually no contemporary rivals. It feels like a film that could have been made only by people who understand on an intuitive level why we sing in the first place.

It gave us a beautiful soundtrack with engaging performances and a story that while admittedly generic is extremely likable and easy cheer for.

Sister Act 2 works simply because it avoids getting stuck in the same storyline as the original film, which happens with so many sequels.

Drags by minute by painful minute as Whoopi Goldberg and a strong supporting cast strive in vain to recapture the breezy energy of the original.

Audience Reviews for Sister Act 2: Back in the Habit

I love these films. Very funny! Whoopi Goldberg is hilarious! A must see!

Not as good as the first one, whether it's from the story or the song selection.. I really thought they were pushed to make this movie just because the first one was a big hit.. Even though all the cast come back again, like Whoopi Goldberg, Maggie Smith, Kathy Najimy, and Wendy Makkena, but the story which is too ordinary, too cliche, and too predictable made the movie wasn't as good as the first one because basically they just want to repeat the first movie's success.. Even though they made the movie a lot lot younger by adding some potential young actors, but basically it's no use.. Overall, I can't say this one is a good one, especially when you should compare it to the first movie, but it's still an enjoyable and entertaining movie..

I remember seeing this in the theater as a child, and, while I kind of liked it back then, i knew it wasn't as good as the first. Only now that I'm older do I realize that there's not much of a reason for this film to exist, and that it falls prey to all of the tired old cliches anyway. The performances aren't terrible though, and the music is at least good, but really, this either should have been different all together, or existed not at all. Why does Whoopi HAVE to don the habit here anyway? She could have easily gotten the job done without it.

Sister Act 2: Back in the Habit Quotes