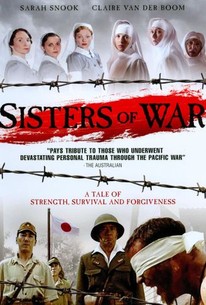 Inspired by a true story, director Brendan Maher's made for television war drama tells the story of army nurse Lorna Whyte (Sarah Snook) and Sister Berenice Twohill (Claire van der Boom), who forge a powerful bond of friendship when they and a small group of Australian nurses on the island of New Britain are taken prisoner by Japanese troops at the height of World War II.

Critic Reviews for Sisters Of War

There are no critic reviews yet for Sisters Of War. Keep checking Rotten Tomatoes for updates!

There are no featured reviews for Sisters Of War at this time.