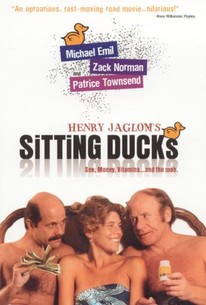 Henry Jaglom wrote and directed this comic delight concerning two small-time hoods, Simon (Michael Emil) and Sidney (Zack Norman). Tired of the low-life, the two try to make it into the big leagues by stealing a large sum of money from gangsters. They decide to leave the country and travel for Central America, where they can live like kings. Along the way, they meet up with Jenny (Patrice Townsend) and Leona (Irene Forrest), two attractive good-time gals. They have a wonderful time ... but the mob is right behind them.

There are no featured reviews for Sitting Ducks at this time.