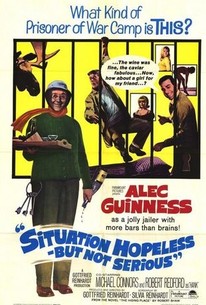 A pair of American Allied fliers (Michael Connor and Robert Redford in his second feature film appearance) are shot down in a small German village near the end of WW II and end up captured and held prisoner in the wine cellar of a lonely old man (Alec Guiness). The old man likes having the two around and so endeavors to keep them in his cellar even though the war is over. The two remain there for seven years and while they wait, the old man regales them with tales of a wonderful Nazi world. The strange plot of this comedy is based on a novel by Robert Shaw.

There are no critic reviews yet for Situation Hopeless---But Not Serious. Keep checking Rotten Tomatoes for updates!

There are no featured reviews for Situation Hopeless---But Not Serious at this time.