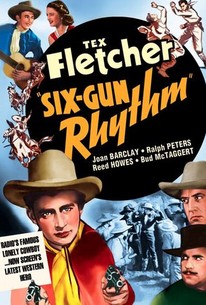 Produced by Sam Newfield's independent Arcadia Pictures Corp., this musical Western was an obvious attempt at creating yet another Gene Autry clone in the person of radio's "Cowboy Answer Man," Tex Fletcher (real name: Geremino Biscelia). In between performing "Cabin in the Valley," "When I Go Back to the Range," and his signature tune "The Lonesome Cowboy" (all by Johnny Lange and Lew Porter), Fletcher plays a professional footballer returning to the small town in Texas where his father is sheriff. But Sheriff Fletcher has mysteriously disappeared and is replaced by the always detestable Ted Adams. The area is being invaded by a gang of rustlers and the new sheriff seems to be answering only to saloon proprietor Jim Davis (former "Arrow Collar" model Reed Howes). Investigating, Tex discovers that the brother (Bud McTaggart) of saloon belle Jean Harper (Joan Barclay) has been railroaded into believing he killed Sheriff. The new sheriff, meanwhile, arrests Tex on a trumped-up charge of murder, but the singing cowpoke is sprung out of jail by sidekick Spud Donovan (Ralph Peters). The two friends seek refuge in Jean's hotel room which is soon under siege by the real killer, Davis, and his gang. They are rescued in the nick of time by Tex's old football colleagues and Fletcher can perform "Serenade to a Lovely Senorita" to the grateful Jean.

James Sheridan
as Pat
View All

There are no critic reviews yet for Six-Gun Rhythm. Keep checking Rotten Tomatoes for updates!

There are no featured reviews for Six-Gun Rhythm at this time.