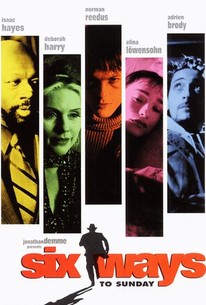 Writer, director, and producer Adam Bernstein followed up the disastrous comedy It's Pat: The Movie (1994) with this black comedy that mixes elements of Psycho (1960) and Goodfellas (1990). Former male model Norman Reedus stars as Harry Odum, a henpecked, 18-year-old momma's boy in Youngstown, Ohio, who -- with his violent temper -- impresses a local boss of the Jewish Mafia. Soon he's found his calling as a hit man alongside his crack addict partner Arnie Finklestein (Adrien Brody), and he discovers that his rage and complicated psychosis fuel his murderous abilities. Harry also falls for the organization's limping, Hungarian-born maid Iris (Elina Lowensohn), a romance complicated by Harry's Oedipal, sexual relationship with his domineering mother Kate (Deborah Harry).Six Ways to Sunday (1997) was based on the Charles Perry novel Portrait of a Young Man Drowning.

What can I really say about a movie that culminates with the main character having sex with his mother?

Exemplifies, all too painfully, the traditional criticisms of independent film.

A sometimes funny parody and uncanny black comedy about incest, sexual repression, and the Jewish mob.

There are no featured audience reviews yet. Click the link below to see what others say about Six Ways to Sunday!