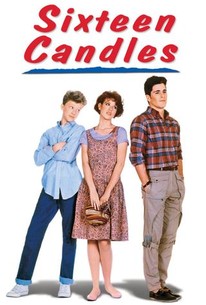 Critics Consensus: Significantly more mature than the teen raunch comedies that defined the era, Sixteen Candles is shot with compassion and clear respect for its characters and their hang-ups.

Critics Consensus: Significantly more mature than the teen raunch comedies that defined the era, Sixteen Candles is shot with compassion and clear respect for its characters and their hang-ups.

Critic Consensus: Significantly more mature than the teen raunch comedies that defined the era, Sixteen Candles is shot with compassion and clear respect for its characters and their hang-ups.

On the eve of her sister's wedding, suburban teenager Samantha (Molly Ringwald) suffers silently as her family forgets her birthday. Even worse, some total dork (Anthony Michael Hall) keeps propositioning her with sophomoric innuendo when she really craves romantic attention from high-school hunk Jake (Michael Schoeffling). Moving from Samantha's family home as it's invaded by outre relatives to a high-school dance where nothing seems to go her way, this bittersweet teen comedy traces the hopes and disappointments of not only Samantha, but also a host of incidental but memorable characters, from a hapless Japanese exchange student to a prom queen and a posse of barely pubescent nerds. A climactic party scene at which these various strata of young America overcome their rigid hierarchies sets the stage for resolutions both tender and torrid. ~ Brian J. Dillard, Rovi

Anthony Michael Hall
as The Geek

Joan Cusack
as Geek Girl No. 1

Elaine Wilkes
as Tracy
View All

The Weekly Ketchup: Robert Downey Jr. As "Iron Man," George Lucas In The News, And More!
A Day to Give Thanks (for Good Thanksgiving Movies!)
Molly Ringwald Apparently Wants Some More "Candles"

As the girl, Molly Ringwald is natural and appealing, but she's lost in a world of blunt, vicious caricatures.

Sly humour and an appreciative ear for the demotic improv of teenage chat completes an attractive package.

A sweet and funny movie about two of the worst things that can happen to a girl on her sixteenth birthday.

Most of the the movie is cheerful and light, showcasing Mr. Hughes's knack for remembering all those aspects of middle-class American adolescent behavior that anyone else might want to forget.

At times it's laugh-out-loud funny, highlighting the awkwardness of adolescence through alternations of clumsiness, low self-esteem, and misadventures of maturation.

Meandering and kind of dull and doesn't quite manage to be as sweet as its romantic final scene.

To try to explain Sixteen Candles as a person who was there for it in first run today is to helplessly shrug and say, 'I don't know, man, it was a different time.'

Sixteen Candles is a genuinely funny and touching coming-of-age story.

High school is high school no matter what the date, and Hughes ensures that the constancies of that age remain unchanged.

Had its cute moments, but made 1.5 hours feel like 3. And what's up with that weird Chinese / Korean / Japanese guy speaking a madeup Asian language.

Since this is John Hughes' directorial debut, it's understandable Sixteen Candles is far below the caliber of such brilliant and powerful classics as Pretty in Pink and The Breakfast Club. But not even that expectation can justify the disappointment Sixteen Candles is. Characters are not as well developed as they usually are in Hughes' best films, and some parts come off as simply ignorant---even mildly racist in relation to a Chinese exchange student. All that aside, however, the film paves the way for Molly Ringwald's later success, and partially signifies her ability to captivate an audience and properly embody the truths of teenage angst. Sixteen Candles is only watchable when Ringwald is on screen. It is unfortunately brimming with cheap humor and shaky plot twists.

Empty characters typical of juvenile 1980's films. Not worth the time.

Not only is this one of the most popular and well known of the "Brat Pack" films, it also has the distinction of rightly being considered the Superbad of its day. That's a very fitting term, because I can definitely see the influence it had on that film, as well as a wide swath of popular culture overall. This is the story of a sweet yet unappreciated girl whose family forgets her 16th birthday. On top of that, her older sister is getting married the day after her birthday, so she is ignored even more. On top if that, the boy she has a major crush on doesn't even seem to realize she exists. On top of THAT is the fact that the one boy who does know she exists is a total geek who is absolutely obsessed with her. This is all at one a funny, sweet, edgy, and wild ball of fun, heart, and pain. It superbly captures what it is like to be a teenager and have to deal all kinds of awful, embarrassing, and ridiculous crap. One of the best things about the late john Hughes is how well he understood youth. The way he writes them and their dialogue is spot on, never condescending, and very well rounded. There are of course some stereotypes and archetypes, but only a small section of them are purely caricature- all of the rest, mainly the leads as played by Ringwald, Schoeffling, and Hall are well rounded and fleshed out characters who are more complex than they seem, and have far more to offer than what the surface shows. In the hilarious scene stealing role of Long Duk Dong is Gedde Watanabe. This character is a goofy exchange student who loves to party. The character is borderline offensive, but Watanabe's performances transcends that and elevates things to the level of genial farce. Had I grown up with this movie, and if I were a fan of the 80s in the same way that I'm a fan of the 60s, 70s, and 90s, then I'd give this one 5 stars easily (probably). As much as I like this movie, and a good as it is, I was originally just going to give it a 4. It is really good, and pretty solid, but not all of it has aged well. The general themes and ideas and timeless, but the specific details are very much of their time, thus they are dated, but not in the same sort of way that like a blaxploitation film is. They are charming, but only to a slight extent. I'm giving this movie the benefit of the doubt though, because it is really hilarious, very sweet, and, as I said, a very influential film. As someone who really doesn't care too much for 80s pop culture, I'd call that some definite high praise.