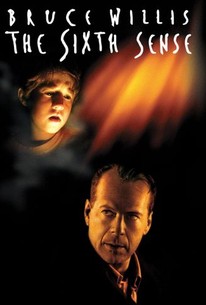 Critics Consensus: M Night Shayamalan's The Sixth Sense is a twisty ghost story with all the style of a classical Hollywood picture, but all the chills of a modern horror flick.

Critics Consensus: M Night Shayamalan's The Sixth Sense is a twisty ghost story with all the style of a classical Hollywood picture, but all the chills of a modern horror flick.

Critic Consensus: M Night Shayamalan's The Sixth Sense is a twisty ghost story with all the style of a classical Hollywood picture, but all the chills of a modern horror flick.

In this chilling psychological thriller, eight-year-old Cole Sear is haunted by a dark secret: He is visited by ghosts. A helpless and reluctant channel, Cole is terrified by threatening visitations from those with unresolved problems who appear from the shadows. Confused by his paranormal powers, Cole is too young to understand his purpose and too terrified to tell anyone about his torment, except child psychologist Dr. Malcolm Crowe. As Dr. Crowe tries to uncover the ominous truth about Cole's supernatural abilities, the consequence for client and therapist is a jolt that awakens them both to something harrowing -- and unexplainable.

Neill Hartley
as Visitor No. 2

Sarah Ripard
as Visitor No. 3

Heidi Fischer
as Visitor No. 4

KaDee Strickland
as Visitor No. 5

Michael J. Lyons
as Visitor No. 6

Holly Rudkin
as Society Lady No. 1

Marilyn Shanok
as Woman at Accident

News & Interviews for The Sixth Sense

View All The Sixth Sense News

Critic Reviews for The Sixth Sense

At root, his films are patient vindications of crazy faiths, of ghosts and comic book heroes. Loneliness is his theme, and when blessed with courageous performers, as in The Sixth Sense, he can take us just about anywhere.

You leave slightly asquirm. You know it will linger. It becomes a clammy, chilly movie building toward a revelation that you cannot predict. As I say: I cannot tell you. You'd hate me if I did. I can only say, don't look now, but look sometime.

Dr Crowe gradually comes to believe that little Cole can indeed commune with the unquiet souls, who are reaching out to him for help. And, yes, the scenes where Cole does so can be very creepy indeed.

So transparent is Osment as an actor, and so rare, that the pain on his face stabs you in the heart.

Osment's pinched, old-young face suggests an ancient's insight without an ancient's defenses -- a sensitivity so exquisitely morbid that you worry more for his emotional than physical well-being.

Willis turns in a measured and understated performance.

Intelligent and poignant; this is a unique kind of ghost story. The human kind.

One of the rare horror films to earn an Oscar nomination for Best Picture, it remain a personal best for the director.

Haley Joel Osment gives one of the best child performances ever, while director/writer M. Night Shyamalan rewards us with one of the best twists of all time. [Full review in Spanish]

Boasts a startling twist ending - a trope that isn't a stranger to the genre, but one that writer/director M. Night Shyamalan uses perfectly.

The Sixth Sense has most importantly been reminding us of how powerful children can be as forces of knowledge, awareness, and healing, if only adults would actually listen to them.

The end is just the icing on a perfectly designed and cooked cake. [Full Review in Spanish]

Audience Reviews for The Sixth Sense

One of Bruce Willis' best, it was the first movie where i finally gathered that it's not just that people pay to see a movie that makes a film hot, but rather how many times they go back ... to see that shit again, that's what makes a blockbuster. This is one hoot, yah sure, you betcha, worthy of repeat viewings ... M.Night Shyamalan hasn't beat this one yet. Willis and Osment create a intricate and layered chemistry that comforts in the face of horror. And Toni Collette's Mom is an exquisite creation indeed. This is why we go to the movies.

No matter how much M. Night Shyamalan continues to go downhill, this will continue to hold up as a great film. Influenced by an old episode of the show "Are You Afraid of the Dark?", this is an engrossing psychological thriller about a troubled child psychologist named Dr. Malcolm Crowe who begins to treat a gifted boy named Cole who confesses he has the ability to see the dead. Both Dr. Crowe and Cole are troubled, and share a sense of alienation, and while Crowe should be the one helping Cole, it seems that there could be a turning of the tables, with Cole being the one helping Dr. Crowe put his own demons to rest. Twist endings were nothing new when this film came out, but it seemingly resurrected the trend (for better or worse). Heck, the trend has continued through most of the rest of Shyamalan's own work since then. It is a good twist, and it works, but I like this film regardless of the twist. I mostly just like how well the twist works, and the point that it gives the film, making you realize it's really about something other than you initially think it is. In general, this is just an extremely well crafted film. Everything is very deliberate, thought out, and expertly set up and executed. This is some great writing and direction, and it's all highlighted by some excellent and evocative cinematography and camera work. At the core of the film though, and what really holds it all together are the two central performances from Bruce Willis and Haley Joel Osment,. Willis proved he can really excel at serious drama, and was even awarded an Oscar nod for his efforts. He's great ,but actually manages to get practically outshined by Osment. Most child actors are so-so at best, but this kid knocks it out of the park here, and it's a shame he's pretty well fallen into obscurity. These two have great chemistry with one another, and you really get drawn into their world and want to see them get through their situations. The other performers are also good, but mostly overshadowed by these two, A big exception would have to be the brief but memorable appearance of Donnie Wahlberg as a former patient of Dr. Crowe's. It's chillingly effective. Actually, 'chillingly effective' is a great way to sum of the whole film. It's moody, atmospheric, eerie, and unforgettable, largely because of the things I've already mentioned, but also because of the terrific score as well. This film gets talked about a lot, and I doubt any of what I've said are new contributions, but trust this film's reputation as great and go see it if you, for some reason, haven't already.

[img]http://images.rottentomatoes.com/images/user/icons/icon14.gif[/img] It kills me to say it but I wasn't particularly scared by The Sixth Sense. I rather found the story intriguing and wanted to know what was going to happen following every twist and turn. So much so that it ends with one massive twist that I honestly never saw coming. It's well constructed generally but I think there are some problems with it. Firstly M Night Shymalan is a very talented writer/director and it was here pretty much where his career truly got off the ground. But the fundamental flaw is his script, it's written with a self confidence that makes the experience of watching the film unengaging and oddly detatching. What he gets right is his spectacular direction of the filming and the performances of the cast. And Bruce Willis plays his character outstandingly considering he'd never really done many toned down, "talky" performances up until that point. Which bring me to it's second flaw, it never knows when to shut up. It's a film that constantly has characters explaining things and talking very quietly and slowly in a way that isn't really creepy. But what made it work in the end for me was my admiration of the incredible performances and the various plot twists. Shymalan makes every single character interesting and keeps the general tension alive. It's not a masterpiece, I think the critics were too fair too it, it's by far an over rated ghost flick, but it does so much with so little resources and proves M Night Shymalan knew how to make films before recent lacklusters like The Last Airbender. It feels so different, and is in ways an art house horror about children's social anxiety, among other reasons I would certainly recommend it as a simple piece of Hollywood entertainment mixed with elements of a classic ghost story.

Suspense till the End. Though always having trouble prouncing the Directors name out. *shakin head