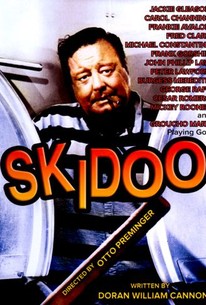 Made on a lavish budget by Otto Preminger and featuring an all-star cast that includes Groucho Marx in his last screen appearance -- and a comic tale that blends gangster melodrama with the 1960s' psychedelia -- Skidoo had promise on paper, but ultimately proved itself a box-office bomb. Tony Banks is a reformed mob hit man who runs an honest car wash with his wife Flo. The first of their many troubles begins when their daughter gets involved with a hippie. Next, his ex-mob boss God calls up and says that he wants Tony to ice "Blue Chips" Packard before he testifies in court. The trouble is that Packard is in prison. At first Tony refuses, but when God orders Tony's best friend shot, he changes his mind and is sent to prison where he is to cozy up to Packard and kill him. But all bets are off after Tony accidentally ingests LSD and goes on a hallucinatory head trip that results in his decision not to kill Packard. Instead, he plans an elaborate escape that lands them into even bigger, more crazy trouble.

Austin Pendleton
as Fred the Professor

Stacy King
as The Amazon

Stone Country
as Themselves
View All

The scattershot and hectic comedy conveys Preminger's sense that the world he knows is coming apart at the seams; he does more than depict or caricature the cultural shifts and the generational clashes of the times-he finds new cinematic forms for them.

One of those movies that defies labels like "good" or "bad" or "insane" or "genius," Skidoo conveys the generation gap of the late 1960s in a singularly bizarre way.

It's worth seeing just for the sheer jaw-dropping amazement of it all.

Skidoo patronises young and old alike, which is pretty much like cutting off both legs before a track meet.

The movie, which has the form of comedy, is 98 minutes of disconnected story-conference ideas.

Preminger seems unable to invest his film with any lightness or spontaneity.

A stodgy old example of the establishment desperate attempt to cash in on an increasingly powerful youth counterculture movement.

... Keystone Mobsters, with career criminals and fun-loving hippies colliding in a comedy of flower power, slapstick and psychedelia...

A relic for the ages that puts a punctuation mark on the times.

Great sums of money were lavished on this dull attempt at humor that failed on almost every level.

This is a real treat.

Preminger's acid trip, and a hilarious piece of vintage hipsterism.

There are worse movies you could watch than this but not many and certainly none with a cast as famous as this! What starts as a silly but not dreadful generation gap comedy devolves into an incoherent mess capped by the horrifying sight of Carol Channing in long platinum wig, admiral's hat and red hot pants singing the title tune. Just when you think it can't get any worse Frankie Avalon sings the credits! It's as dreadful as it sounds. For bad movie lovers this will be heaven for the rest of the world it's a psychedelic version of hell. A great many famous actors, some more talented then others, damage their reputations and embarrass themselves. A testament to a time when major studios, Paramount in this case, were trying to connect to an audience that it had no understanding of and entrusting it to a director who was equally clueless.

Jackie Gleason plays a retired gangster sent to prison to assassinate a stool pigeon; gentle, freaky flower children help him get out of the mess he's gotten himself into in this notorious all-star train-wreck made by squares for the benefit of the counterculture. Watch it to see Carol Channing doing the frug in yellow pantyhose, Groucho Marx playing "God" and saying "groovy," and, best of all, Jackie Gleason freaking out on LSD. Not for the average moviegoer but if your looking for rare camp this is a gold mine.

In 1968 Otto Priminger decided to take acid and shoot a film, Skidoo is the result. Gleason's a hippie hating ex-mobster and his boss is a Kingpin called GOD played by Groucho Marx. The cast is amazing with music by Harry Nillson. The film is very strange and campy, it's not very good but worth a watch just to see Groucho smoke dope.