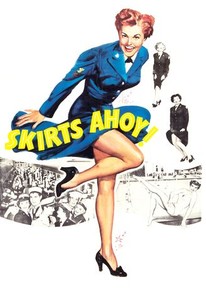 Esther Williams generously shares screen time with Joan Evans and Vivian Blaine in Skirts Ahoy! The three leading ladies play WAVE officers who experience a daunting series of romantic misadventures. Whitney Young (Williams) had joined the WAVES after leaving her fiancé at the altar. Conversely Mary Kate Yarbrough (Evans) was jilted on her wedding day by her intended, while Una Yancy (Blaine) has donned a uniform in hopes of finding a husband. Much of the humor is of the gender-switch variety, with the three lady sailors ogling and whistling at every eligible male who crosses their path. Inevitably, Williams sheds her navy duds in favor of a swimsuit, while Blaine performs a comic torch song in the manner of her "Miss Adelaide" characterization in Guys and Dolls. Poor Joan Evans isn't given a musical number, but she does get her man (Keefe Brasselle) at the end. Guest performers include the singing DeMarco Sisters and youthful aquatic champs Russell and Kathy Tongay.

Billy Eckstine
as Himself

Bobby Van
as Himself

DeMarco Sisters
as The Williams Sisters

Robert Board
as Young Sailor

Marimba Merrymakers
as Themselves
View All

There are no critic reviews yet for Skirts Ahoy!. Keep checking Rotten Tomatoes for updates!

Minor musical that even though its set in the service still manages to get Esther in the water at regular intervals. Debbie Reynolds and Bobby Van pop up for a manic guest number that comes out of nowhere.