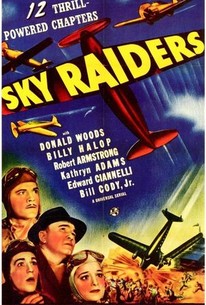 Universal catered to the young fans of aviation with this airborne serial, which featured a plucky kid -- "Bowery Boy" Billy Halop -- and plenty of "sky riders." Famous aviator Bob Dayton (Donald Woods) hires a bright member of the Air Youth of America, Tim (Halop), to help him finalize a hush-hush project: a new type of fighter plane and bombsight. This being 1941, plenty of enemy agents are after the invention, including the nefarious Felix Lynx (Eduardo Cianelli). It takes Dayton, Tim, and the co-owner of Sky Raiders, Inc., Lieutenant Ed Carey (Robert Armstrong) 12 breathless chapters before they are able to defeat the enemy. The final installment was quite appropriately entitled "Winning Warriors."

Jean Fenwick
as The Countess Irene

There are no critic reviews yet for Sky Raiders. Keep checking Rotten Tomatoes for updates!

There are no featured reviews for Sky Raiders at this time.