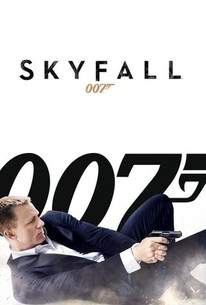 Critics Consensus: Sam Mendes brings Bond surging back with a smart, sexy, riveting action thriller that qualifies as one of the best 007 films to date.

Critics Consensus: Sam Mendes brings Bond surging back with a smart, sexy, riveting action thriller that qualifies as one of the best 007 films to date.

Critic Consensus: Sam Mendes brings Bond surging back with a smart, sexy, riveting action thriller that qualifies as one of the best 007 films to date.

In Skyfall, Bond's loyalty to M is tested as her past comes back to haunt her. As MI6 comes under attack, 007 must track down and destroy the threat, no matter how personal the cost. -- (C) Official Site

The 50 Highest-Grossing Movies of All Time: Your Top Box Office Earners Ever Worldwide
Your Epic Movie Franchise Binge Guide: The Best Way to Watch the Biggest Series
Daniel Craig Is Returning as James Bond – What Critics Are Saying

It achieves an effective balance between the ever-escalating action sequences that each successive Bond picture apparently demands, fresh use of charismatic talent, and nods to the legacy

Mendes's breezily, imaginatively directed film shows faith in the thrill of the real -- not the weightless dazzle of CGI but the feeling of actual objects (bikes, cars, Tube trains) crashing and colliding in a solid world.

A Bond film should feature a menacing villain who's also just a touch daffy; Javier Bardem has more fun than anybody else onscreen as a rogue agent with a mommy complex and a come-hither leer.

Skyfall easily moves into the top 5 of Bond movies ever, maybe even the top 3 with From Russia With Love and Casino Royale.

This latest installment, which firmly cements Daniel Craig as one of the best Bonds ever, feels more serious, less gimmicky, more geared towards mature adults.

Skyfall is an immeasurably satisfying Bond film. Sumptuously photographed and terrifically executed, the film is a perfect valentine to the world of 007.

Skyfall is an anniversary film and delivers on every note.

This chapter does so much right.

I do enjoy most of Skyfall, it has some great set pieces and a charismatic villain but some pacing issues hold it back for me. Still better than Quantum of Solace at least!

The film blended those new impulses with the franchise's old flourishes so well...

A rip-roaring action film, too, with elite direction, terrific lighting and editing, and strong work from a talented cast.

For me, an ordinary spy thriller is what it is.

Skyfall continues the reinvention of Bond for the modern era that was started with Casino Royale. This is a top notch action thriller with great acting and wonderful homages to the series past. To top it all off, it has one of the best intro's and Bond songs of the entire series. This is also one gorgeous film, easily the best looking Bond film of them all. For me, this cemented Daniel Craig as the best Bond ahead of Connery just slightly. Outside of Casino Royale, this is best Bond has to offer and a fantastic reboot of the classic characters and plot for a new generation.

Mendes comes in, sees what's been wrong with the franchise and boy, is he mad. He decides to reboot, screw this crap, reboot the bastard in mid-stream. Taking elements of the new and fusing them with the classic stuff he grabs the electric paddles and jumpstarts the old series, the old spy (shaken but not stirred), jumpstarts the tuxedo to life. And he's alive ... he's aliiiive. Jardem plays the Bond villain as openly gay (How many Bond villains are gay? "What makes you think that you're my first," says Bond) and with a malevolent joy not seen in awhile ("I KNOW I'm bad, what of it?!"), invigorating the proceedings. And the story sets in place not only Craig as the new Bond (finally, as the two films previously failed to do) but also leaves you waiting for the next entry, leaves you waiting even for a remake (Thunderball?). Bravo. About bloody time. And now Cubby can rest.