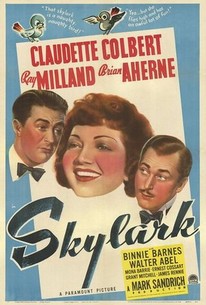 Claudette Colbert and Ray Milland, stars of the 1940 hit Arise, My Love, were immediately reteamed for Skylark. Adapted from the play by Samson Rafaelson, the film stars Colbert as the wife of a neglectful businessman Milland (her role had been played on Broadway by Gertrude Lawrence). Brian Aherne is a handsome bachelor who hopes to win Colbert away from her husband. At first enjoying her vacation from marriage, Colbert finds she can't keep up with Aherne's peripatetic lifestyle, and returns to Milland. Skylark's comic highlight is a slapstick sequence in which Colbert tries to prepare lunch in a yacht during a storm. The scene was shot in a single take, an accomplishment in which the actress took justifiable pride. ~ Hal Erickson, Rovi

May Boley
as Fat woman in subway car

Howard Mitchell
as Man in front of Tony

There are no critic reviews yet for Skylark. Keep checking Rotten Tomatoes for updates!

There are no featured audience reviews yet. Click the link below to see what others say about Skylark!