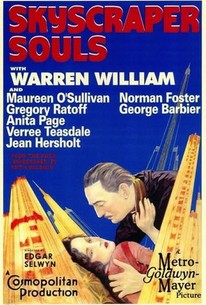 When a greedy businessman, David Dwight (Warren William), attempts to control the events that take place in his 100-story office building, his meddling and interference leads to a variety of complications for its inhabitants.

Henry Roquemore
as Man with hat

Not shy about parading around its hot young starlet Maureen O'Sullivan in lingerie.

After watching enough of these pre-Code movies, you begin to notice a few recurring themes: women in lingerie for one contrived reason or another, references to an unmarried couple having had sex by showing them having breakfast, and men who aren't inclined to take 'no' for an answer, continuing to badger or paw a woman until she consents to go out with him. You'll find all of those things in 'Skyscraper Souls', an average movie for the time period which held my interest, but was not exceptional. Warren William plays the part of an executive whose passion is to erect and own a giant skyscraper, and he does well in the role. His character seems nice enough on the surface, well-spoken and polite, but it turns out that he'll do anything to get what he wants, including screw over his business partners, and tell his long-time mistress (a woman in the office) that he'd love to get married to her, but his wife won't consent to a divorce - when in fact he hasn't asked her for one. Hedda Hopper is fantastic as his wife, by the way, in the small role she has. When he notices his mistress's secretary, played by the lithe Maureen O'Sullivan, he starts putting the moves on her. O'Sullivan is also being aggressively pursued by a very annoying bank teller (Norman Foster) who she (somehow, painfully, argh) starts falling for, thus setting up one of the movie's conflicts. One of the problems the movie has is that none of the characters are all that likeable. That's not a requirement for a great film of course, and it's nice to see nuance and realism - but in this case, when it's heading for the ending it's heading for, it's hard to feel what the director Edgar Selwyn is trying to make us feel. Another problem is that it's a bit of muddled mix of drama and romantic comedy, which meanders about. The parts that relate to the corporate scheming bog down, although the insider trading and stock speculation is mildly interesting given it was just a few years after the great stock market crash. Overall, though, it's just a bit jumbled. Watch it for Warren William's smooth evil, and for the spirited and beautiful Maureen O'Sullivan, and you may enjoy it more than I did.