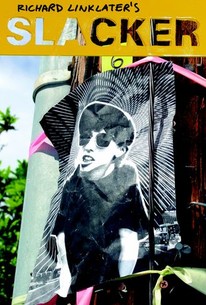 Critics Consensus: Slacker rests its shiftless thumb on the pulse of a generation with fresh filmmaking that captures the tenor of its time while establishing a benchmark for 1990s indie cinema.

Critics Consensus: Slacker rests its shiftless thumb on the pulse of a generation with fresh filmmaking that captures the tenor of its time while establishing a benchmark for 1990s indie cinema.

Critic Consensus: Slacker rests its shiftless thumb on the pulse of a generation with fresh filmmaking that captures the tenor of its time while establishing a benchmark for 1990s indie cinema.

In Richard Linklater's Slacker, a girl tells her boyfriend, "You're just pulling these things from the sh*t you read. You haven't thought it out for yourself. It's like you pasted together these bits and pieces from your authoritative sources. I don't know. I'm beginning to suspect there's nothing in there." Linklater caroms from one character to another in the college community of Austin, TX, moving through an unlinked assortment of people who like to hear themselves talk but don't like to listen very much. The characters include a cab fare (played by Linklater) who expounds to the cab driver about his theory of reality, a robber who ends up getting a tour of Austin from his victim, a man who suspects that one of the Apollo astronauts saw an alien spaceship, and a woman carrying around Madonna's Pap smear in a cloudy container. Linklater's relaxed and ironic tone depicts a collection of post-Reagan lost souls adrift in a sea of shallowness with no direction home. As one character asks a friend, "Do you ever just want to get out of this country?"

Jerry Deloney
as Been on the Moon Since the 50s

Stella Weir
as Stephanie from Dallas

Skip Fulton Jr.
as Two for One Special

Abra Moore
as Has Change

Don Stroud
as Recluse in Bathrobe

Robert Pierson
as Based on Authoritative Sources

Sarah Harmon
as Has Faith in Groups

Meg Brennan
as Sitting at Cafe

Phillip Hostak
as Hit Up for Cigarettes

Denise Montgomery
as Having a Breakthrough Day

Annick Souhami
as Has Conquered Fear of Rejection

Stephen Jacobson
as S-T-E-V-E with a Van

Eric Lord
as Doorman at Club

Rachel Reinhardt
as Cousin from Greece

Stewart Bennet
as Sitting on Ledge

Nolan Morrison
as To Be Buried By History

Kyle Rosenblad
as Going to Catch a Show

This unconventional film will offend anyone looking for a plot, but Linklater's smart observations speak volumes.

When the way characters are described in the credits ("Dostoevsky wanna-be," "Having a breakthrough day") is more involving than the characters themselves, you know you're in for a long evening.

The film presents the teeming weirdness of daily life in Austin as a swarm of individual alternatives, each spinning wildly out of control and crashing into one another's active fantasies to unleash vast creative energy.

On the whole, this is a fascinating example of apparently fly-on-the-wall film-making, made all the more intriguing when you discover it was all planned like a military exercise.

At times, it's like watching someone else's home movies, but there's something oddly compelling about such studied eccentricity.

Each new character lasts only a few minutes, but the bigger picture is one of the most memorable movies about young people trying to find themselves.

Although its structure seems novel to me from a formal point of view, I am not captivated by the lives of those characters that it presents in a simple day in Austin, Texas. [Full review in Spanish]

It holds up, a time capsule of laid-back denizens of Austin, TX that harkens back to the first stirrings of the independent film movement. It's also very funny.

Making sure those differences between its countless characters are both heavily discernible, and endlessly interesting, is what allows the individuals of Slacker to come alive as people.

Pretension is kept at bay by the fact that whenever someone is holding court, the others in the scene barely seem to be listening.

Linklater is very aware that his film doesn't have a linear narrative and the movie is structured with that knowledge, as well as for a variety in tone and theme.

A perfect portrait of Austin, Texas in the nineties, this film is full of vignettes of what it is like living out your twenties in that time period. It balances between being a love letter to Austin, and a diatribe about the collective characters that you meet when you're young. Linklater's films have often been heralded as centering on realism in contrast against the absurd. From the "Anti-Artist" in the bar scene to the conspiracy theorist in the book store, we've heard, and listened to, and felt exhausted by many of these same people in our lives. Though this film is nearly twenty-five years old, it feels just as relevant in today's times. Academia is always full of hotheads and passionate centenarians alike. This too is the world of liberal society, happy to philosophize about every aspect of life but intent on not living it. This film is funny, intellectually stimulating, and perversely amazing with its characters and cult following. A definitive piece of Linklater filmmaking and cultural iconoclast in the world of indie filmmaking, this is a must watch, in any case.

In Richard Linklater's first feature film, there are clear moments of technical mishaps and set issues, however, with such an ambitious project most of that is forgivable for being his first film. There is no linear plot in this film, but it feels more like a relay race/hangout film, as one scene with characters seamlessly leads into another scene with new characters, and so on. "Slacker" is all about the lives of burnout teenagers as they live their lives after college. It was just very interesting to see how alike and how different some people are from each other. This film is brilliantly written, but that is what Richard Linklater's films are (character driven). Aside from some technical issues that may or may not take you out of the film, you should be able to really enjoy this film. It is a fantastic first attempt for director Richard Linklater, who Produced, Directed, Wrote, and appeared in this film. "Slacker" is great!

Even in this early stage of his career, Linklater makes his ambition known. Though the entire thing probably won't resonate with everyone, there may in fact be something for everyone in this weird, meandering narrative experiment that will change the way you think about the strangers you see every day.

The camera tracks the aimless slackers of Austin, TX, following one for a few minutes and then veering off to chase another as they drink coffee and spout a 50/50 mix of philosophy and conspiracy theories. An experimental portrait of the subculture of bright but unambitious dropouts and unemployed postgrads that exists in every college town.