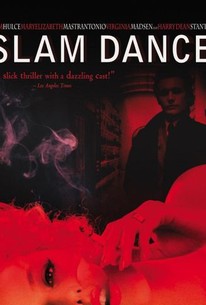 In this off-beat and stylish mystery by director Wayne Wang, C.C. Drood (Tom Hulce) is an underground cartoonist who is separated from his wife Helen (Mary Elizabeth Mastrantonio) and daughter Bean (Judith Barsi). When his lover Yolanda (Virginia Madsen) is found murdered, Drood is the main focus of the police investigation. When Drood uncovers a sex scandal involving police chief Gilbert (John Doe) and Detective Smiley (Harry Dean Stanton), he realizes he is being made the fall guy for the crime. Singer Adam Ant plays Drood's buddy Jim.

Sasha Delgado
as Girl at nursery

Joshua Caceras
as Boy At Nursery

Christopher Keene
as Cop on street

The plot of this movie is a little infuriating, because it gets in the way of the people.

Slam Dance's advertisement proclaims, "It's NOT about dancing." In the end, it's not about much else, either.

Oughtta come with a decoder ring.

Terrible movie, but so much fun to watch

Great movie which has very little to do with slamdancing. Tom Hulce (Amadeus) is a divorced comic book artist who gets involved with a seductive woman with some secrets.