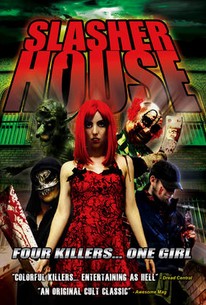 When RED awakens in a prison cell within an old abandoned Madhouse, she has no idea how she got there and why she has been placed there. As her cell door opens she soon discovers that she is not alone. Trapped with the worlds most notorious serial killers she finds herself caught in a deadly game with no escape as one by one the other 'inmates' are released to stalk her as their own prey. RED must now battle impossible enemies as she tries to find her freedom and soon realizes that there is a bigger plan for all this than she first realized. Will this 'Final' girl have what it takes? Or will she see the last of her days in the endless corridors of SLASHER HOUSE!

There are no critic reviews yet for Slasher House. Keep checking Rotten Tomatoes for updates!

There are no featured audience reviews yet. Click the link below to see what others say about Slasher House!