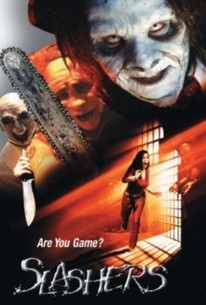 The Japanese TV reality game show "Slashers" pits six contestants against three costumed serial killers in a program that features actual deaths to the contestants as they flee the killers in a vast maze filled with obstacles. The last contestant alive wins a million-dollar jackpot. In this episode, the contestants are six Americans, including Megan (Sarah-Joslyn Crowder), who is using her appearance to protest the inhumanity of the program; Devon (Tony-Curtis Blondell), a former special ops soldier anxious for a big payday; and Brenda (Sofia de Medeiros), a beautiful model who doesn't know what she's gotten into until it's too late. The Slashers are Chainsaw Charlie (Neil Napier), a masked hillbilly with a chainsaw; Dr. Ripper (Christopher Piggins), a maniacal surgeon with oversized shears; and Preacherman (Napier), a Bible-thumping program rookie with a razor-sharp crucifix.

Welcome motherfuckers. You are now tuned into the bottom of the barrel. Bad acting, bad directing, poor pacing, and so on. I knew something was wrong when at the hour mark there had only been one death and the killers were more interested in removing the ladies tops then killing them, Shame as it actually had a good concept. Not the most original in the world, but good. Basically at this point the only thing that could save this movie was the gore, which was only average at best. An easy movie to skip.

A movie about a Japanese game show where contenders have to survive being stalked by insane murderers. Kind of a Running Man meets Friday the 13th. And it's Canadian!

It's awful but I didn't move the entire film. Horrible acting & shot on DV but it offers an interesting premise and some really good gore.