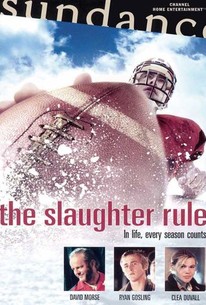 Critics Consensus: A bleak but original indie, The Slaughter Rule benefits from outstanding performances by Ryan Gosling and David Morse.

Critics Consensus: A bleak but original indie, The Slaughter Rule benefits from outstanding performances by Ryan Gosling and David Morse.

Critic Consensus: A bleak but original indie, The Slaughter Rule benefits from outstanding performances by Ryan Gosling and David Morse.

A teenager at a personal crossroads finds himself questioning the things that have given his life meaning in this independent coming-of-age drama. Roy Chutney (Ryan Gosling) is a high school senior in a small Montana town. Roy doesn't have an especially close relationship with his mother Evangelline (Kelly Lynch), and he hasn't seen his father in years. That doesn't prevent Roy from feeling emotionally devastated when he learns that his father has killed himself, and Roy's self-esteem takes a beating when he's cut from the high school football team shortly afterward. Roy wiles away his time swilling beer with his best friend, Tracy Two Dogs (Eddie Spears), and falling into a romance with Skyla (Clea Duvall), a barmaid at a local tavern, but it seems Roy's short time on the high school gridiron impressed Gideon Ferguson (David Morse), a local character who coaches a semi-pro six-man football team when he isn't delivering newspapers or trying to score a gig singing country songs at nearby honky-tonks. Gid thinks Roy has potential, and asks him to join his team; encouraged by Gid's belief in him, Roy agrees, and he persuades Tracy to tag along. While playing hardscrabble six-man football helps restore Roy's self-confidence, he finds it doesn't answer his questions about his future or his relationship with Skyla, and when Gid's overwhelming interest in Roy begins to lend credence to the rumors that Gid is gay, Roy starts to wonder just why he was asked to join the team. Jay Farrar, founder of the acclaimed alternative country bands Uncle Tupelo and Son Volt, composed the film's musical score.

Noah Watts
as Waylon Walks Along

Ben Snipes
as Renegade
View All

Critic Reviews for The Slaughter Rule

The movie has a bred-in-the-bone sense of place, and a willingness to take big emotional risks.

The writing and directing team of twin brothers Alex and Andrew Smith have made an astonishingly good first feature.

Having made his name as a ferocious, self-hating Jewish skinhead in The Believer, 22-year-old Ryan Gosling gives another memorable performance as a lonely, world-hating fatherless quarterback in The Slaughter Rule.

As compellingly played by Morse, a great actor who gives pic more than it gives him, Gideon comes off as a sensitive soul who knows how risky it can be to appear too sensitive in a small town.

The film's powerful meditation on masculinity gets much of its credibility and punch from the two leads, especially Morse, a reliable character actor who sinks his teeth into a role with heavy physical and psychological demands.

David Morse, who's spent the last 20 years kicking around network television and building up an resume of impressive movie credits, establishes himself as a truly formidable presence in this powerful first feature by Alex and Andrew Smith.

[Gosling] once again shows how magnetic he can be in challenging roles.

Gosling and Morse give strong performances in this bitter pill movie.

Everyone's got demons to deal with -- from Gideon's guilt over a kid that played for him and died under mysterious circumstances to the audience's unwillingness to sit through two hours of yet another inspirational football movie.

Best movie I saw in 2002. Features a terrifyingly real performance by David Morse.

Montana's wide-open spaces -- and the closed hearts of the people who live there -- make for a sincere, superbly acted story of loss and need.

A timid template of an indie movie that glides through all the proper turns, sticks up all the appropriate signposts, and never once takes a demanding or truthful step.

Audience Reviews for The Slaughter Rule

[font=Century Gothic]In "The Slaughter Rule", Roy(Ryan Gosling) is not having the best of weeks - his father is killed, then he is cut from his high school football team, apparently for not being angry enough. A coach of an independent six-man football team, Gideon(David Morse) recruits him to his team. There are local whispers as to whether Gideon's interest in Roy is purely professional...while Roy catches the eye of an attractive waitress, Skyla(Clea Duvall).[/font] [font=Century Gothic]"The Slaughter Rule" is a deliberately paced movie that takes full advantage of its unique setting in rural Montana. The beautiful scenery contrasts wonderfully with the hardscrabble lives of the characters. I thought it did a very realistic job of portraying small town life especially for the teenagers. I wish it had made more of a statement concerning masculinity, though. The performances are fine, especially David Morse who finally gets to play a character he can sink his teeth into.[/font] [font=Century Gothic]Note: On Saturday, I saw "Dallas 362" where Kelly Lynch plays a widowed mother. In "The Slaughter Rule", she plays a character who is officially divorced when her ex-husband is killed. Is this a trend or am I really having one of those weeks?[/font]