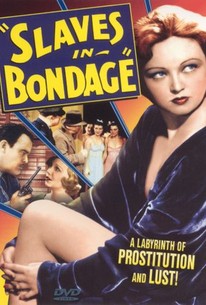 A police raid on a roadhouse leads to a war on vice that results in the downfall of a vicious gangster and the sadistic madam who runs his prostitution ring in this sordid crime drama from director Elmer Clifton. While she may be beautiful on the outside, on the inside Belle Harris (Florence Dudley) is a hateful monster who relishes the opportunity to turn innocent young girls into money-grubbing prostitutes as she oversees the day-to-day duties at the Berrywood Roadhouse. Though Belle may be a cold corrupter, her physically abusive boss, Jim Murray (Wheeler Oakman), is even worse. As the police close in on Murray's lawless syndicate and his empire comes crumbling down, the truth comes out for all to see when the city reporters descend upon the hapless women he has so callously enslaved.

Critic Reviews for Slaves in Bondage

There are no critic reviews yet for Slaves in Bondage. Keep checking Rotten Tomatoes for updates!

Audience Reviews for Slaves in Bondage

There are no featured audience reviews yet. Click the link below to see what others say about Slaves in Bondage!