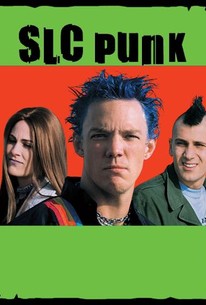 What's it like being the only punk rockers in the biggest Mormon community in the world? Stevo (Matthew Lillard) and Heroin Bob (Michael Goorjian) provide the answer to this and other questions in SLC Punk. Stevo and Bob (whose name is actually an ironic reference to his fear of needles) are two friends fresh out of college who sport mohawks and blue hair, listen to hardcore and try to live up to their own anarchist ideals while figuring out what to do with their lives. Which wouldn't make them unusual in New York or Los Angeles, but they're fish out of water in Salt Lake City, Utah, where they drink beer, chase women and pick fights with "rednecks" along side a mixed bag of metalheads, hippies, hicks and posers who are fellow outcasts in the most clean-cut community in America. In the midst of all this, Stevo's dad hopes his son will follow in his footsteps and study law at Harvard; while Stevo surprisingly has the grades, he's not sure if he wants to go. Featuring a soundtrack of mid-80's punk from The Ramones, Minor Threat, The Dead Kennedys and others, SLC Punk was chosen as the opening-night feature at the 1999 Sundance Film Festival.

Michael A. Goorjian
as Bob

James Duval
as John The Mod

Til Schweiger
as Mark

[Matthew Lillard's] performance dominates the film, and he does a subtle, tricky job of being both an obnoxious punk and a kid in search of his direction in life. He's very good.

Funny. SLC Punk! got to me.

...one of those movies that's a lot more fun to watch than it is to think (or write) about

A bitter, boring mess with no worthwhile message

The script's deficiencies are balance by a surprisingly mature performance by Lillard, who is obviously capable of better roles than he's been offered.

There's nothing about the "SLC" in SLC PUNK that makes it stand out. The tale could have been told in any city, really

It's a rental for when you've seen everything else and are in the mood for some rebellion.

SLC Punk cannot quite reach the richer depths it grasps for, because it doesn't have the material to support the large dramatic distance Stevo has to travel.

...a moderately enjoyable scourging of red-necks and Ronald Reagan.

A furiously paced, unabashed, raw story of two best friends (Matthew Lillard, Michael Goorjian) who choose not to conform to the boring, conservative lifestyle that inhabits their hometown of Salt Lake City, instead opting for a life of punk-filled adventures and acts of violence against the system. DIrector/writer James Merendino's screenplay is loaded with vicious assaults against the norms of society, and he backs it up considerably well with "Fight Club"-esque cutaways full of such enthusiasm from his lead star. Lillard's energy and infectious spirit is completely believable and a breath of fresh air, as he fully takes this movie upon his shoulders and makes it his own, which is surprising when you consider how far he has flown under the radar ever since the release of this film. Although it has some occasional terrible acting (mostly from supporting characters) and it does not utilize its location as well as it could have, it still remains a minor-"Fight Club" entry that has some interesting ideas and some devilish humor thrown in for good measure that keeps it clicking effortlessly.

The film is an anthem to punks, to hipsters, to all young rebels, and ultimately concludes that it's not a lifestyle, but merely a naïve phase. But does writer/director Merendino look to extol the demerits of youthful rebellion? Hardly. "SLC Punk!", more than anything, is a coming-of-age film, and Matthew Lillard's portrayal of his interesting character is quite good. For all the hype and emphasis the film puts on its conservative setting, Salt Lake City, though, there's virtually no local flair about the film. Oh well. It's not an easy film to put into words, but it sure is fun to watch.

Finally, a punk film that doesn't only just have the old sex & drugs representation, but a wide variety of what life can be like, depending on your crowd. As Stevo (Matthew Lillard), a hidden brain who has been accepted to Harvard law school, spends all his time forcing himself to stay out of school while he and his punk friends screw around with their town and it's people as his family and friends all have their own problems as time passes by. "SLC Punk" forcefully proves that punks are bad news, but I thoroughly appreciated the realism of their feelings behind the scenes as they direct their emotions towards the camera. I do think they could have added a bit more character development, but overall this movie is just a great time, that surprisingly pulled on my heart-strings. This film is great!

Heroin Bob: Well, it's a crazy fucked up world and we're all just floating along waiting for someone who can walk on water, man.  I've heard from true punks that this movie is just a stereotype and that it is offensive to real punks. Well, that may be the case, but I'm not a punk; so I don't really care. I like SLC Punk because of it's chaos loving characters, no matter how stereotypical they are. The movie isn't a masterpiece, but I believe it to be a really good movie, that is funny for the duration; that is until it drops an emotional bomb on us at the end. The main character Steveo played by Matthew Lillard is a punk. A true punk, not some poser who says stuff like, "Anarchy in the U.K." He's a smart guy that thinks the only way to bring as much chaos as possible to the world, is by not using his education. His dad wants him to go to Harvard and become a lawyer like himself, but that's just not punk. Steveo's best friend, Heroin Bob, played by Michael A. Goorjian is a fellow anarchist. Contrary to what his name suggests, Bob doesn't do drugs. He's called Heroin Bob because of his fear of needles. Bob is the most complex character in the movie and probably my favorite. My second favorite character in the movie is Mike, played by Jason Segal, pre How I Met Your Mother. Segal is one of my favorite actors to watch. He's not the most talented, but he's funny and he never over acts like a lot of other comedic actors. Mike looks like a nerd, but he'll beat the shit out of anybody for any reason. Steveo says he's one of the most hardcore punks of the scene and it shows. The story really has no clear direction for nearly the entire movie. This makes sense because it is a movie about punks who really have no direction in life. So why would the story about them have a direction. The ending is ironic for both Steveo and Heroin Bob.  SLC Punk is a cool little movie about punks. Is it accurate? I don't know, you'll have to ask a true punk. Is it a good movie? In my eyes, yes, it's a great movie.