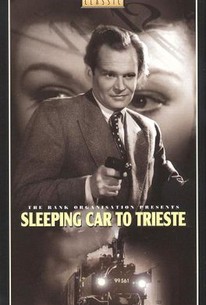 Sleeping Car to Trieste is a remake of one of the best railroad melodramas of the 1930s, Rome Express. The film's "maguffin" is a diary containing important political information. Stolen from a diplomat in Paris, the diary finds its way on board the Orient Express. Already, the two thieves have double-crossed each other, and among the passengers there are plenty of interested parties-heroes and villains alike-who hope to claim the diary for their own purposes. When one of these parties is murdered, police chief Jolif (Paul Dupuis) takes charge of the case, but there's still many a plot twist to come before the guilty are punished and the innocent rewarded. An inordinate amount of footage is devoted to the wisecrackery of Bonar Colleano, cast as yet another stereotyped American. The climax of Sleeping Car to Trieste is a classic, endlessly imitated by future-and lesser-Orient Express espionagers. ~ Hal Erickson, Rovi

There are no critic reviews yet for Sleeping Car to Trieste. Keep checking Rotten Tomatoes for updates!

There are no featured reviews for Sleeping Car to Trieste at this time.