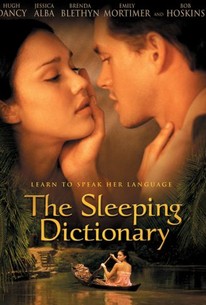 Guy Jenkin directs this straight-to-video romantic drama shot on-location in Malaysia. In the rainforests of Boreno in the 1930s, English officer John Truscott (Hugh Dancy) accepts a position to colonize the native population of Sarawak at the request of the British government. In following with the native tradition, he is given the services of a servant, Selima (Jessica Alba). A position that British officers refer to as a "sleeping dictionary," she is a concubine to share his bed and teach him the local language. The tradition forbids romantic entanglements, so the relationship is watched over by superior officer Henry Bullard (Bob Hoskins) and his wife, Aggie (Brenda Blethyn). When Selima and John fall madly in love, they enrage both the colonizers and the colonized. Also starring Emily Mortimer and Noah Taylor.

Michael Jessing
as Melaka
View All

Critic Reviews for The Sleeping Dictionary

If your taste runs to palm fronds and moonlit rendezvous, you might enjoy this impeccably produced bit of kitsch.

I can't say much for the wandering storyline...

A rather stiff soap opera romantic-melodrama.

Audience Reviews for The Sleeping Dictionary The Sleeping Dictionary was a lovely romance with emotional character interpretations.Jessica Alba was perfect in this role and she was looking so young. The movie itself was very good and enjoyable to watch.The chemistry of Jessica Alba and Hugh Dancy was breathtaking and the supporting cast such as Bob Hoskins, Emily Mortimer and Brenda Blethyn was also amazing. There were little actions scenes, not much, but all that it was about was a simple love story and that worked for me.

This I never saw advertised in the cinema, but I watched it because of Jessica Albas recent fame. I would have expected it would have been a more popular film, its good, its fun, adult family film for the parents perhaps. Its a Romance.

First off, I give you the good news: Jessica Alba has nude scenes in this film. Rejoice perverts. The bad news: It was a body double. =( Anyway, the movie didn't sound too appealing to begin with but nothing else was on. I'm glad I had the chance to see this. I'm unsure as to whether the story is based on any reality but regardless, I really enjoyed it. Not only was the story captivating but I also loved the cinematography. To add, the acting wasn't half bad. Worth seeing.

Hey! I ran across this on FLIX last night. I, uh, I'm sorry to say that I really, ah, have nothing to offer, critically speaking, about this movie. I was, ah, concentrating too hard on, um, something while, uh, . . . . Okay, I was too busy watching Jessica Alba to think about anything else. I admit it. I admit it, okay? My apologies.

Oh, I just thought of something: poison darts. Yes, and killing evil white men who try to poison the indigenous inhabitants in order to appropriate their silver mines in secret. Oh, and prototypical colonialist behavior on the part of the British, befitting that age-old urge to empire build. And, oh yeah, there's a white man enamored of a native woman. I don't think I've ever seen that before on film. And the white folk hate the idea, and so do the natives. And . . . uh . . . .

HEY! It's Jessica Alba! Cut me some slack.