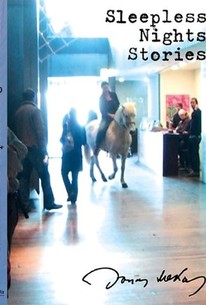 During the 1960s, '70s, and '80s, avant-garde director Jonas Mekas pioneered the "video diary" form of nonfiction filmmaking, which involved the impromptu, fly-on-the-wall documentation of various experiences in his life. This mode of observation was particularly interesting for audiences given Mekas' constant immersion in celebrity circles: It provided the opportunity to see icons such as John Lennon and Yoko Ono outside of the limelight. Mekas returns to the form at age 88 with this outing; presented as a series of sketch-filled chapters, it may strike many viewers as more accessible than the director's prior work. It constitutes a sequel to A Letter from Greenpoint and picks up where that opus left off: Mekas has just moved into a new Brooklyn apartment and suffers from chronic insomnia. Soon, however, he grows restless and undertakes a series of adventures at home and abroad, often accompanied by famous friends. These escapades include visits with Harmony Korine just before and after his son Lefty is born, a jam session with composer Pip Chodorov in Luxembourg, an encounter with French heartthrob Louis Garrel in Paris, and a ride to the airport with Bjork.

Mr. Mekas makes little attempt to smooth out his transitions between takes or scenes, which only reinforces the intensely personal, even handmade nature of the work.

The movie indulges a few too many whims, but it's never less than alive.

More often, Mekas's focus on "names" comes off as a cloistered insensitivity to the wider world.

A freeform, New York-based variation on the Arabian Nights tales by Jonas Mekas is both a pan-narrative and a disarming portrait of its sweetly curious maker.

It proves that Mekas is still very much awake, contemplating the broad gulfs of the past and future, the little life that, as Shakespeare put it, "is rounded with a sleep."

Sleepless Nights Stories merely lingers on the personal, and the mundanity that was so magical in one film is now rendered just plain ordinary and dull.

There are no featured reviews for Sleepless Nights Stories at this time.