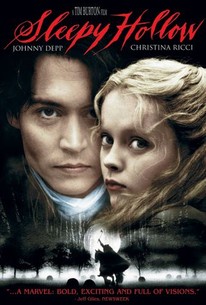 Washington Irving's tale of Ichabod Crane and the Headless Horseman gets a few new twists in a screen adaptation directed by Tim Burton. In this version, Ichabod (Johnny Depp) is a New York City detective whose unorthodox techniques and penchant for gadgets make him unpopular with is colleagues. He is sent to the remote town of Sleepy Hollow to investigate a series of bizarre murders, in which a number of people have been found dead in the woods, with their heads cut off. Local legend has it that a Hessian ghost rides through the woods on horseback, lopping off the heads of the unsuspecting and unbelieving. Ichabod refuses to believe in this legend, convinced that there must be a logical explanation for the murders. In time, Ichabod becomes smitten with a local lass, Katrina Van Tassel (Christina Ricci), who is the sweetheart of the burly Brom Bones (Casper Van Dien), and he becomes determined to capture the murderer to prove his bravery and win her heart. Christopher Walken, Jeffrey Jones, and Christopher Lee highlight the supporting cast; Lee's appearance is particularly apt, since Burton has cited the Hammer films of the 1960s as a major influence in making this film. Andrew Kevin Walker and Tom Stoppard contributed to the screenplay. ~ Mark Deming, Rovi

50 Fresh Scary Movies and TV Shows to Watch on Netflix
The Matrix Trilogy, Bad Santa, Chef, and More on Netflix and Amazon Prime This Week
Now Streaming: Lawrence of Arabia, Insomnia, And More

There are lots of slasher movies better than this.

For about an hour it's a fine, ghoulish carnival sideshow, and that has its charms, but there's a thin desperation about the climax.

Burton, for all his skill, never ranges beyond the thrills of the obvious; he doesn't enlarge the meaning of the horror he shows us, the way a Brian De Palma might.

No longer a prodigy at age 41, Tim Burton has now become a problem; I still find myself watching his movies with bemused tolerance, thinking surely he'll be a great director when he grows up.

Sleepy Hollow has an aesthetic that seems based on album covers. It doesn't feel like the work of an artist in any way.

Its aesthetic, haunting atmosphere and narrative are signature Tim Burton that perfectly blend together. Lubeski's cinematography is top tier.

Sleepy Hollow represents the height, or at least the meridian, of Tim Burton's career as a master of mixing mythology, horror and humor. Oh, to have him back again.

It is a horror film, but it's a Tim Burton horror film. Make no mistake about that.

Burton piles on the artistic gore for this rendition. He just forgets to add the terror.

The quirks of this Sleepy Hollow prevent it from ever being truly scary, but what they do make it is a quintessentially Burton film.

Burton creates the best homage to the Universal monster films of the late 30's, early 40's that I've ever seen in this steroid-injected take on the old Washington Irving tale of a horse-riding phantom of doom. Not everything goes smoothly. Johnny Depp has to "do" scared wimpy guy a bit too much, making other actors have to react disgustedly too much as well. It gets old after the third or fourth time. Walken's ghost growls sometimes too long ("stop growling and do something, f'cryingoutloud!" I'd think). And Ricci ... was she only a stand-in for Winona Ryder? Whatever, despite these niggling concerns, the work succeeds in eliciting the romance those films of old simmered in, the mood and nuance. I loved it.

A handsomely shot and decorated film from the always gothic Tim Burton about the legend of Sleepy Hollow and the headless horseman (the terrifically casted Christopher Walken), and how Ichabod Crane (Johnny Depp) ventures to the mythical town of Sleepy Hollow to investigate some suspicious murders done by the villain. While the acting pretty much sucks, and Depp is still doing his "hands acting" thing way too much, the dark nature and atmosphere that permeates the film is unmistakable. Burton definitely has a feel for this story, as well as how to capture the look of it from a cinematography standpoint, it is just too bad the acting is so bad. Which more or less pushes this film into "campy" territory far too often. So, it's a toss-up. I really liked certain parts of it but then some aspects were so terrible you can not help but laugh. So, not the worst movie I have ever seen, but far from the best. Although I will admit I enjoyed it even when it gets utterly ridiculous.

New York City constable Ichabod Crane, despairing at his police force's archaic methods of investigation seeks to prove himself on a murder case in Sleepy Hollow where several of its citizens have been found decapitated. The American literary classic gets the Burton treatment in this lavish re-imagining of the familiar tale of the headless horseman. Johnny Depp brings his usual brand of quirky charm to the part of the olde worlde CSI wannabe whose faith in science and reason is tested by coming face to face with a ghoulish spectre; in fact this part can be seen as the prototype of the slightly inept, not entirely courageous pirate we all know and love. This film unites all the elements that make me love Tim Burton's work and is a kind of gothic fantasy homage to Hammmer horror with the perfect blend of gore, humour and swashbuckling tied up in an ingenious whodunnit plot. Visually it ranks amongst Burton's best, with fantastic sets, beautiful period design and superb effects that is bolstered by an outstanding ensemble cast that breathe life into this off beat historical world that is tinged with the supernatural. Scary, exciting and fun, I would have to say that for my money this is the best of Burton's films.

Tim Burton and Johnny Depp are a wonderful combination and once again Burtons twists to a classic make it a fun ride.