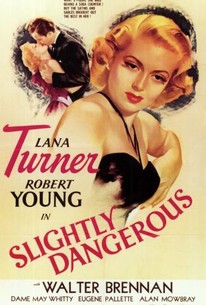 This airy bit of MGM fluff stars Lana Turner as small-town soda clerk Peggy Evans. After telling off the self-important new drugstore manager Bob Stuart (Robert Young), Peggy, convinced that there's no future for her in her hometown, fakes her suicide and heads for the big city. After a series of dizzying comic complications, she successfully poses as the long-lost daughter of millionaire Cornelius Burden (Walter Brennan). Meanwhile, poor Bob, held responsible for Peggy's "death," comes to town determined to clear his name by exposing Peggy as an impostor. How this all works itself out is as hard to swallow as the rest of the picture, but the stars are attractive and the production values first-rate.

Dame May Whitty
as Baba

Kay Medford
as Girl Getting off Bus

Robert Blake
as Boy on Porch

Frances Rafferty
as Girl Getting off Bus

Pat West
as Man Getting on Bus

Has a few moments that work.

There are no featured reviews for Slightly Dangerous at this time.