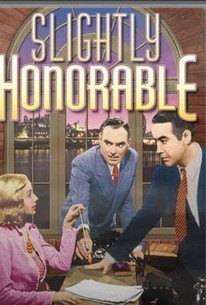 The successful producer-director combination of Walter Wanger and Tay Garnett served up another winner with Slightly Honorable. Adapted from F. G. Presnell's novel Send Another Coffin, the story concerns the efforts made by corrupt politician Cushing (Edward Arnold) to frame honest attorney John Webb (Pat O'Brien) for the murder of Alma Brehmer (Claire Dodd). In concert with his diligent and apparently slow-witted assistant Rus Sampson (Broderick Crawford), Webb hopes to squelch Cushing's plan by locating the real murderer-who turns out to be a lot closer to Webb than he'd ever imagined. Ruth Terry has one of her best screen roles as a birdbrained nightclub hoofer who helps Webb clear himself. Like many Walter Wanger productions of the period, Slightly Honorable is currently available on the public-domain video market.

Eddy Chandler
as O'Leary, the Cop

Bud Jamison
as Humboldt, the Cop

Frank Dae
as President of Senate

Taylor Garnett
as Reporter
View All

This murder mystery melodrama offers such a hodge- podge of nonsense that, even the most ardent follower of stories of this type will fail to be entertained.

There are no featured audience reviews yet. Click the link below to see what others say about Slightly Honorable!