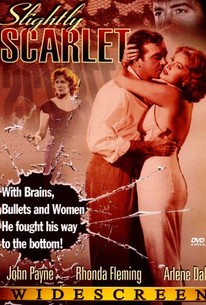 Slightly Scarlet, adapted from James M. Cain's novel, Love's Lovely Counterfeit, is a slight, though well-crafted mystery. Shot in Technicolor, the film combines color sequences with a moody use of dark shadows to create a spectacular, visually exciting film, though somewhat short on character and action. Ben (John Payne), works for criminal boss Sol Caspar (Ted de Corsia) and is in love with June (Rhonda Fleming), Sol's secretary. Dorothy (Arlene Dahl) is June's sister and becomes romantically involved with Ben also. The lightweight story is predictable in its outcome but is saved by a good performance by Arlene Dahl as June's amoral, neurotic and completely unpredictable sister who is unscrupulous in her pursuit of her sister's lover. Slightly Scarlet, while technically brilliant, is a mediocre, predictable crime melodrama.

Film noir thriller loaded with creativity, sharp use of color.

Florid potboiler in lurid technicolor. The girls look amazing and are dressed in beautiful dresses that it's somewhat hard to believe Rhonda could afford on her salary as a secretary but then her house is palatial and she has a live in maid so perhaps reality wasn't what they were going for. Arlene Dahl takes her part as a worthless tramp and runs with it. A fun ride if you're a fan of high gloss melodrama.