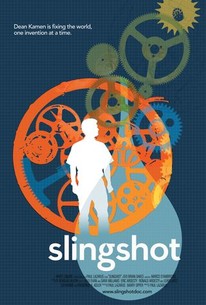 A documentary profiling Segway inventor Dean Kamen and his quest to deliver safe water to the world's population by developing SlingShot, a vapor compression device that produces clean water. Kamen, who is also known for inventing a variety useful of medical devices utilizes a non-linear approach to his creative process. Because many third world countries do not have access to safe water the pathogens in the water supply can cause widespread illness. Kamen has tackled this problem and developed a system that can turn poisoned well water and river sludge into safe drinking water. Directed by Paul Lazarus.

Lazarus' film might not be all that engaging as a piece of cinema, but it's a worthy examination of a classic scientist trying to make strides for the human race while living in a post-modern world that doesn't always care.

Director Paul Lazarus devotes much of the running time to constructing Kamen's cult of personality. He's variously shown to be a Steve Jobs-type visionary, a Bill Gates-type philanthropist and a John du Pont-type eccentric.

Accounts of Mr. Kamen's other good works - like founding a charity to teach children about science - only increase the sense of a glorified sales pitch, however noble or inspiring the cause.

This is fascinating, but the story demands journalism rather than hagiography.

Drinkable water will turn toxic in the near future, globally. Genius inventor of the Segway builds a water purifier like nothing you've seen before. 'Slingshot' brings hope.

The doc is much more than a description of a new technology -- it's an examination of why science is not more highly valued in our society.

Unfocused and lacking insight, but it's at least entertaining thanks to its witty, quirky subject.

A compelling character study of a likable do-gooder whose only regret is that he has but one life to devote to his fellow man.

I'm surprised to see the hate-on by the critics. I thought it was fascinating to see how a society changing invention can get hung up due to lack of responsibility that anyone will take for its distribution, in this case the ability to purify water.