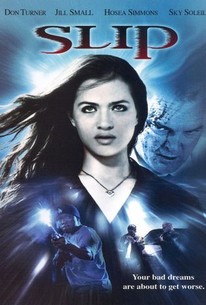 A girl with the power to communicate with the dead helps a small-time car thief seek revenge against the gangsters who killed his nephew. As a young girl, Sarah watched helplessly while her mother was murdered. The trauma of witnessing that horrible event shocked the young girl so badly that she developed an acute sensitivity to the spirit realm. Now, when someone dies leaving unfinished business, they use Sarah as a vessel to set things straight from beyond the grave. Cal is a car thief looking to turn over a new leaf. He's had enough of life on the streets, and he's ready to go straight. But just as Cal is about to kiss his life of crime goodbye, his murderous business partners accuse him of a crime he didn't commit. Now, in order to prove his innocence, Cal will need his nephew's help. Guided to Cal by the ghost of his deceased nephew, Sarah prepares to clear the repentant criminal's name once and for all. But she'll have to act fast, because a dark force from her past is back, and trigger-happy gangsters are about to become the least of her worries.

There are no critic reviews yet for Slip. Keep checking Rotten Tomatoes for updates!

This one is kind of a Ghost Story and a Street action Film Story. All the charters are real good in this one, hated the fact the some only had a short part. Kind of a strange ending, but I would recommend it as a rental. Worth the 4 stars.